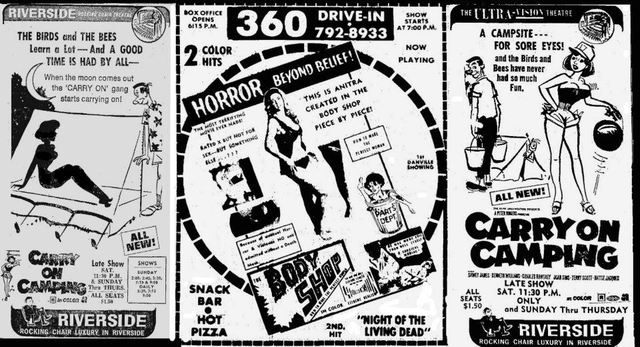 The Riverside Theatre had two screens in the 1980’s. At a later date it became a Carmike theater, but no longer appears on the Carmike website.

Any indication on the status of the Riverside Theater.

Did this opened as a single screen cinema?

On the marquee from December of 1984,indicating that this was a twin cinema..aka The Riverside Twin.

By 1984,this theater was under Carmike Cinemas.

“2010” was the unsuccessful sequel to Stanley Kubrick’s 1968 science-fiction masterpiece “ 2001”. It was no wonder that Kubrick was furious with MGM after what they did to his beloved film. Kubrick was set to direct the sequel,but was cut in favor of director Peter Hyams.

I can’t remember the exact year it opened, but the Riverside opened in the mid-sixties as a single theater, and was “twinned” years later when the Riverside 2 was built onto the side.

It was located in the Riverside Shopping Center, and marked the shift of the hardtop theaters from along Main St. row (except for the drive-ins, the theaters in town were actually all along one continuous stretch that went from the North to the Schoolfield) to the shopping centers.

The Riverside had a wider auditorium and larger lobby than the other theaters, and the other selling points were “rocking chair” seating and “UltraVision”, which I suppose meant that the screen was wider and curved slightly.

The screen had curtains that closed before each showing, then opened to the appropriate width; if they opened wider than usual, you knew you were in for a treat. I remember seeing “Deliverance” there in first-run, and the wide-screen format was exceptional in this setting. The “Dueling Banjos” scene also kicked into surround sound, as did the whitewater scenes.

The Riverside 2 was added to accommodate more films running in Danville; by this point, Danville only had three hardtops— the Riverside, the Park, and the Plaza— and all three became twins.

The Riverside 2 was a smaller, “no frills” theater, though I believe it also had “rocking chair” seating, which was pretty commonplace by then. It tended to get the less-“visual” features that would play the Riverside.

THEATRE HISTORY OF THE RIVERSIDE:

Oh yes,there was also a six screen theatre that is NOT listed here on Cinema Treasures that was located at Danville’s Piedmont Mall that was under Cineplex Odeon.

The six screen theatre never came to Danville at the mall. There was announcements about it being built on the upper level of the mall just above Hills Dept store. But with the movie business taking a slump in the 90’s due to videos and then later DVDs rentals, plans were cancelled by the company that was planning on coming here. It was just to risky at the time.