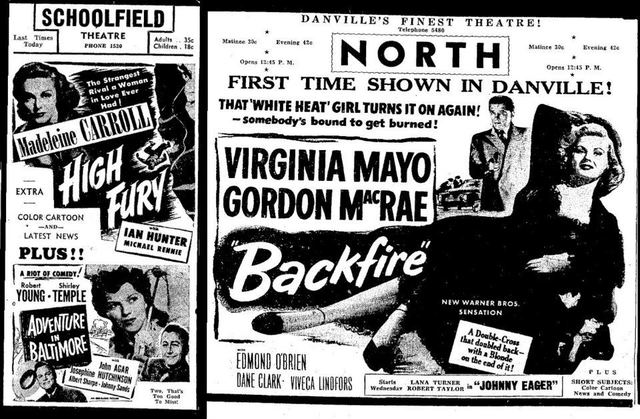 Located in a large building that once held both a YMCA and the Schoolfield Theatre, this building later served as a recreation center before it was torn down in early 2007.

The village of Schoolfield was a company town built for the employees of Dan River Mills, a textile firm founded by the Schoolfield brothers. The town was founded in 1903 and the theater was in operation by the early 1920s. The company’s ownership of the village ended in the early 1930s, and it was annexed to the City of Danville in 1951.

I’m not sure how long the theater remained in operation, but the movie Backfire, showing at the North Theatre in the ad posted above, was released in 1950. Adventure in Baltimore was released in 1949 and High Fury in 1947, so the Schoolfield must have been a very late run house by that time.