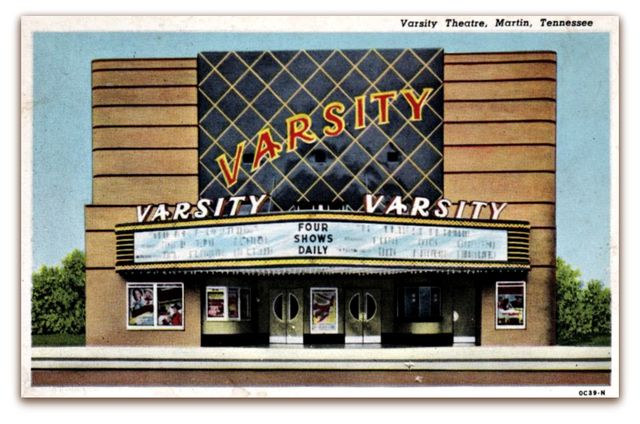 I found a listing for a Varsity Theatre on Oxford St (no street number on file) in Martin. The theatre was built around 1949 and was part of the Ruffin Amusement Company of Covington, TN. Ruffin also managed the Halls Theatre in Halls, TN and the Ritz in Covington, TN.

A picture of this theater may be found with an accompanying article from 1951 here:
View link

If you look at the waymarking page for the theater, it states that the Varsity is now a fitness center and that renovations are ongoing to restore some of the former exterior features. 104 Oxford would be the correct address.

This theatre has just been added to the National Register of Historic Places.The Architerical Firm of Speight and Hibbs designed the theatre.Its seated 1000 people when opened.It also opened with air-conditioning.It now houses a Fitness center as posted above and a Physical Therapy Clinic.

A great movie is on the marquee"THE VERDICT"one our Christmas movies i really enjoyed seeing an old pro like Newman back.Should have WON THE OSCAR!!!!!!!

They aren’t just a gym – more of a combination fitness center and physical therapy center. From a photo on their website (linked above) it looks like they’ve preserved the aut=ditorium fairly well – original architectural features as well as the proscenium are still there. Looks like a well maintained business.

This theater I believed was built by a contractor named Ruffin. One of the owners told me that years ago. I believed he said it opened in 1933. The same people that owned it also owned the Starlight Drive in and the Sunset Drive in. My friend lived upstair in it for years I think after it closed. It had a apartment upstairs. In about 1992 a man named David Christian who managed the theaters in Union City reopened it for a while. He got sick and they closed it. In the time that it reopened I remembered seeing House Sitter with Steve Martin and Goldie Hawn. The same guy that built this one also built the one in Hickman Kentucky. It is a shame that this place is not used as a theater. One of the best in the area.

From Martin Tennessee a postcard image of the Varsity Theatre.

I can’t find any evidence that this house was ever called the Martin Theatre. This fairly long history from the web site of The Sideline, the fitness center that currently occupies the building, says that the Ruffin Amusement Company built the Varsity Theatre in 1949, opening it on August 18, though it had been in the planning stage since 1941. The original theater signage is still on the building, which would be very unlikely if the house had ever had another name.

The Varsity Theatre operated until 1987, then closed for several years and reopened in 1992, but closed in 1996. Additional history credit Tennessee Good Old Days Facebook page.