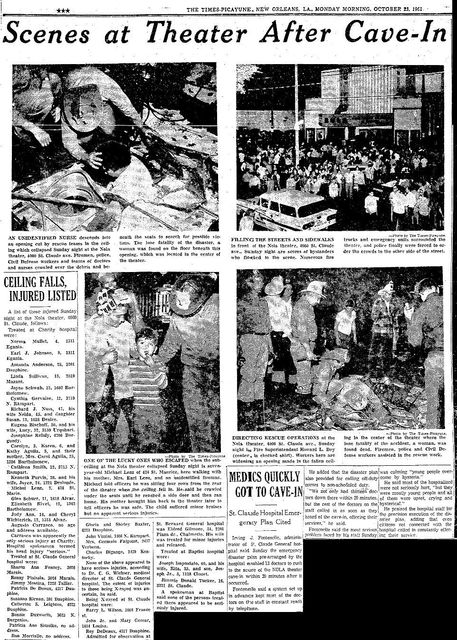 The Nola Theatre closed in 1965 and has since been demolished. There is a vacant lot where the theatre once stood. Any further information on this theatre would be appreciated.

This opened on September 24th, 1941. The grand opening ad is in this theatre’s photo page.

Just came across this horrible and sad article from an old Boxoffice magazine dated Oct. 30, 1961:

The ceiling of the Nola Theatre caved in on Sunday evening around 6:30 PM. Approximately 65 to 70 patrons were trapped under a network of wire lathing and plaster. A 65-year-old woman usher was killed. Several others were seriously injured and others suffered from bruises and shock.

“Homicidal” was the movie playing that evening.

Plaster began falling from the rear of the auditorium and blanketed all but the last four rows. Pandemonium raged for several hours both inside the theatre and outside as police, firemen, as well as Army and Navy volunteers worked feverishly to pull patrons, many of them hysterical, from the rubble. The street outside was filled with cries and shouts of spectators many of whom were parents of children trapped inside. They pushed against police lines in a frantic effort to enter the theatre and find their children. The audience consisted mostly of youngsters when the ceiling fell. Ambulance sirens filled the air for several hours as the injured were taken to hospitals.

There was no explosion or fire and no construction was in the area at the time of the cave-in. One younster told police that he heard a rumbling like a drum beating overhead, and looking up he saw dust and plaster falling. He quickly ducked under the seat pulling his sister down with him. Other boys on their way to the concession stand heard a cracking noise and saw plaster coming down in one big sheet.

What a horrible tragedy. I’m suprised the Nola Theatre reopened after this. Even after repairs were made I seriously doubt I could ever see another movie there just knowing what happened.

Wow, what a story guess CHuck who wrote the intro never heard about or surely he would have included it.Nick, was that an old Boxoffice Magazine I gave you? or was it Charlie’s.

Mike, I found the story by looking through old issues of Boxoffice Magazine online at: http://www.boxofficemagazine.com/the_vault

Nearly all issues are available from around 1925 to the present. Once you’re on just click on the desired year and month. You can browse entire issues page-by-page. Warning: the site is very addictive so be prepared to spend a few hours browsing!

I was outside the “NOLA” when the roof fell in. A elderly llady who “us kids” referred to as the “Pop Corn Lady” was killed as she was hurring down the center aisle yelling for the patrons to get under their seats. I was late for the move, but three of my friends were near the front of the theater. Two jumped on the stage in the very front of the screen and the third hid under his seat. Although my friends were not injured seriously, the two on the stage were slightly bruised with minor scratches and my third friend under the seat had a slight bump on his head. All three were covered with sheetrock dust. It was an extremely frietening experience even from the outside. The police made me leave before I could see my friends, but I saw them latter that nite and got the whole story. Most of the movie goers went to St. Claude Hospital which was located across the street and only a few blocks away. I think that each of my friends received $700 within a few days as a quick settlement. I am not exactly sure of the settlement amount ??