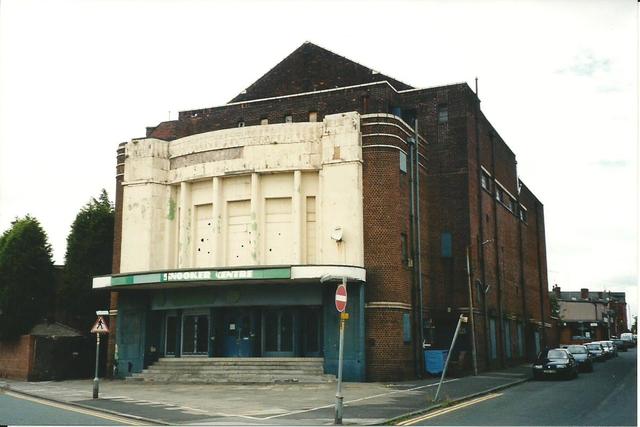 Built in the traditional Art Deco style of the time, originally plans had been drawn in 1931 by Liverpool based architect Lionel A.G. Pritchard. Eventually by time of construction, plans designed by architect William T. Harrison were used. It was built by Mrs. Frank Haslam Ltd., it was situated directly opposite Earlestown train station, with a brick and cream-tile facade and traditional canopy and staircase leading up to it’s entrance. In its heyday it was seen as modern, clean and spacious, with a rather exquisite interior – tiled and wood panelled walls, terrazo floors, deep pile carpeting, traditional proscenium arch and grand twin staircases leading to the stalls.

Unfortunately not much information exists about the history of this once luxurious theatre, but it was taken over by the Leeds based Star Cinemas chain and the auditorium was twinned in the 1970’s, with a Star Bingo Club operating in the former stalls and cinema use continuing in the former circle which was known as Studio 1. The cinema closed in the early-1980’s, and bingo continued for a while. The building was subsequently in use as snooker hall. It lay dormant for a year until it was damaged by fire in an arson attack in March 2004 and boarded up. It stayed that way for several years as ‘a blot on the landscape, a burned out shell’. Rather unfortunately it was demolished in January 2010 to make way for an apartment block. ‘The current planners for which are proposing a building which reflects the former grandeur of the cinema. There are concerns that the Curzon Cinema was hurriedly demolished without correct public notification. According to an eyewitness of the demolition, the Curzon Cinema’s balcony was still intact.

Heartbreaking. Laura, thank you for giving the Curzon an afterlife through your finely detailed summary. Could the local economy have supported a restored theatre?

Smashed windows? And for what purpose I wonder. At least those who built this house of entertainment and worked there have not lived to see this mindless destruction.

Thank you S Porridge, when me and my dad came across it was just such a sad and sorry sight, my dad even said he doubted it would remain there long. I think unfortunately the people in the local area had grown tired of seeing it and it unfortunately became an eyesore. I think the area suffers from frequent vandalism, especially to empty properties; and also from the mindless demolition of their historical buildings despite the public voice calling out for renovation and restoration rather than losing the entire face of their community. It’s only a very small town so its a real shame. And Simon that’s so very true, whoever set fire to the Curzon should really be ashamed of themselves.

The rest of the history of this cinema is very sketchy.
In December 1972 a “Studio 1” cinema in Earlestown was advertised in the local paper.
Presumably this building (?), after which it seems to have been an EMI Bingo Club (by 1975), and a Coral Snooker Centre by the 1980s.
Recently demolished.