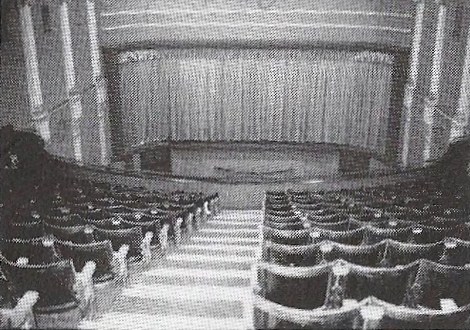 Started in 1914, the project, originally called the Majestic, was delayed because of wartime restrictions. It was bought out uncompleted in 1916 and eventually opened as the Futurist Theatre on 30th July 1919 with Lilian Gish in "The Great Love". It was operated by Sol Levy and was the first cinema in Birmingham to have screen curtains. The auditorium was decorated with wall murals designed by Val Prince and carried out by artist Erskine Williams.

Always at the forefront of the city cinemas, the Futurist Theatre was the first cinema in Birmingham to present ‘talkies’ on 18th March 1929 when Al Jolson in “The Singing Fool” was shown after a Western Electric(WE) sound system had been installed. The Futurist Theatre was damaged by German bombs during an air raid on the city in November 1940. This closed the building for some time until repairs could be carried out and it re-opened on 20th April, 1943 with Loretta Young in “A Night to Remember”.

When the Grade Brothers took over the Shipman & King circuit in the late-1960’s, the Futurist Cinema became part of the S & K circuit. The Futurist Cinema was twinned, reopening on 26th November 1981 with screen 1 holding 721 and screen 2 seating 234. The re-opening films were Faye Dunaway in “Mommie Dearest” and a double bill Monty Python’s “Life of Brian” and “Airplane”. It later became a Cannon cinema and closed in the 1990’s.

After lying derelict for a number of years, it was transformed into an ‘adult’ nightclub known as Spearmint Rhino. It underwent a restoration/renovation and in July 2016 it was converted into a seafood restaurant named Peninsula Lobster.

An October 2005 photograph of the exterior of the former Futurist Cinema, now in use as a ‘Gentleman’s’ Club with lap-dancing as the entertainment:
View link

Have loaded a picture of better days….

How I hate the name… Cannon….

A photograph of a ‘now showing at the Futurist Cinema Birmingham’ reel, from the collection of the Regal Cinema in Tenbury Wells:

It is long overdue that this superb cinema, is fully restored and put back into full working order.

With the full development of New Street Station, this would prove to be an incredible opportunity to put this cinema back into working order, so Birmingham has a premier cinema by New Street Station showing Main stream films, whilst it can be ideally complimented by the Electric Cinema specialising in Art House, specialist and main stream film releases.

Birmingham lacks a major cinema within the Soutside Quarter, this would prove and idea opportunity to provide a major cinema for visitors to the City, as London and other major cities have.

This would have an incredible impact on Birmingham’s cultural scene, and would be economically viable with the creation of the New John Lewis store, and the additional foot fall provided by the new Metro link.

This is a once in a lifetime to restore a cultural gem of Birmingham, and place a superb opportunity to act as a catalyst for regeneration in the area.

The prominence of apartment blocks (The Orion Building and other blocks), pubs and the Alexandra theatre, not to mention the Mailbox, prove a genuine ideal opportunity to restore this cinema, to contribute to the financial an cultural regeneration of the area.

To deny such an opportunity would be foolhardy and deeply wasteful.

The Futurist does conjure up many memories for me. I attended the 1985 premiere of BACK TO THE FUTURE, which had Rustie Lee as guest of honour. I rather foolishly thought we were going to only get the film, but instead we got the whole programme, including the Kate Bush video CLOUDBUSTING. Other memories are of seeing the STAR TREK 1,2,3 triple bill, in which the film burned during the opening Klingon Battle sequence, plus seeing the likes of BEVERLY HILLS COP, STAR TREK IV, CROCODILE DUNDEE 2, RAMBO FIRST BLOOD PART 2, MAD MAX BEYOND THUNDERDOME, CITY HEAT. Other notable films to play here included a reissue of GONE WITH THE WIND with queues around the block, THE GETAWAY, HOUSE BY THE CEMETERY. I live and work in London now, but the memories still remain

One other memory from the BTTF premiere was the DeLorean they purposefully parked in John Bright St.

@KavanH. Maybe they should also lobby local councils to put the Odeon Queensway back in order as a rep cinema. That was another great place and one that could play 70mm when it could.

The Cinema was Bombed twice during WW2 .. The last one was a total wreck..

Between 1954 and 1958 the Futurist was the Birmingham outlet for 20th Century Fox CinemaScope films, following the bust up between Fox and Rank over the cost of ‘Scope installations and the extended run policy.