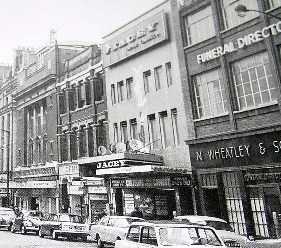 The Electric Theatre was opened as a cinema on 27th December 1909 in the centre of the city and has been showing movies almost ever since. Is the Electric Cinema the oldest working cinema in Great Britain? At the moment it seems it is, by just a few months. It was designed by noted ‘live’ theatre architect Bertie Crewe.

In 1921 it was re-named Select Cinema. On 20th March 1937 it changed its name again and became the Tatler News Theatre, and had been given a new façade designed by architect Cecil E.M. Fillmore. In the 1950’s another name change to the Jacey Cartoon Cinema.

During the 1960’s the cinemas programming policy and name changed to the Jacey Film Theatre and specialised in showing “continental” (pornographic) films. In the 1970’s the old Electric became part of the Classic chain of cinemas and maintained its “continental” film programme. It was at this time that a second screen seating 78 was added.

The company owning the Electric Cinema went into liquidation in December 2003. The last film shown was “Kill Bill”. The property was put up for sale but, because of a Preservation Order, the Electric’s destruction was prevented. Because of the Order it couldn’t be converted into offices or apartments.

In the summer of 2004 the lease of the Electric Cinema was sold, the new owner’s intention being to use it as a recording studio. However, the new owners became so enamoured of the building it was decided the interior be restored, the old features being retained, but with the technical innovations of the 21st century installed.

The twist at the end of the tale is that UGC’s Arcadian Multiplex nearby closed in 2003.

The Electric Cinema was closed in March 2020 due to the Covid-19 pandemic, and due to its 88-year lease about to expire, it was announced in May 2021 that the closure would be permanent.

Rumour has it that the basement of the cinema was used as a makeshift morgue during the war. The word “Hospital” is still there painted it large red letters and very very faded.

Two interior shots of the lower (main) screen at the Electric, taken in October 2009:

Take a look at this, to see the technology in place during 2000. A film by Fred J.Fullerton, which will be of interest to ‘techies’ everywhere.

photo taken around 2005 of the derelict facade
http://www.flickr.com/photos/woody1969/63364702/
and photo of the rear showing the TATLER painted sign
View link

The Classic company did not carry on with the continental programmes . They tried 2nd run. When Cannon bought out ABC. They then got the Futurist.. ABC New Street and Bristol Road. They then sold the lease to “Theatre One Coventry… They then sold lease to Elephant Films..

I used to visit the Jacey as a kid 1954 to 1959 ish on a Saturday morning pending my pocket money there wonderful memories.

allan3381. I worked at the tattler in 1948 as 3rd projectionist, And worked the super B T H PROJECTORS. Before that I worked at the Bristol, Bristol rd. After.that, I worked at the CARLTON Sparkbrook. I migrated to Australia, in 1950, and worked at the Savoy News Theater Adelaide. years later I became The Picture Show Man showing Movies all around country South Australia.

All images will be credited. My email address is .uk

Also if anyone else has any photos or memories they’d like to share that would be great.

The new owner of the Electric has released a film about the history of the cinema, and its return from the dead. “The Last Projectionist” is well worth an hour and a half of anybody’s time, as is essential viewing to anybody remotely connected to the film presentation industry.

Correct. The Last Paragraph is wrong The second screen was added in the 1990’s by Classic Cinemas soon after their take over from Jacey.