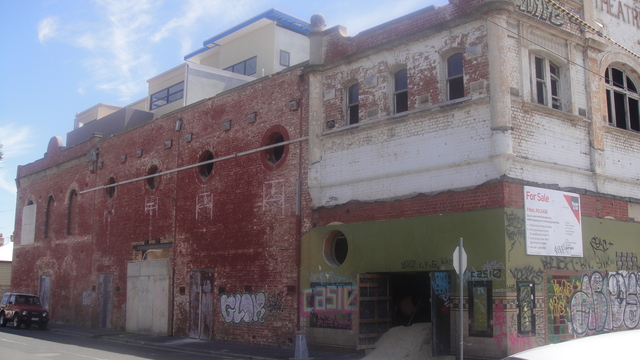 The Murray Street Hall was opened in 1891 adjacent to Yarraville Railway Station, in this Melbourne suburb. It became the St. George’s Theatre on 28th June 1913.

Opened as Murray Street Hall in 1891.

The former St Georges Theatre is significant to the City of Maribyrnong because: – its creation was heralded with much enthusiasm by the community and its leaders and has been a major social gathering place within the City over a long period ( Criterion A4, G1); – it was the setting for expression of dissent to conscription in the World War One era plus other events such as bitter conflict among the City’s youth ( Criterion A4); – its upper facade shows great architectural invention, using the Romanesque revival (Criterion F1); and – it is a prominent landmark within the Yarraville railway precinct, relating closely with much of the adjacent significant architecture, but identifiable as a public auditorium among the commercial and transport structures nearby which make up the precinct – Contributed by Greg Lynch –