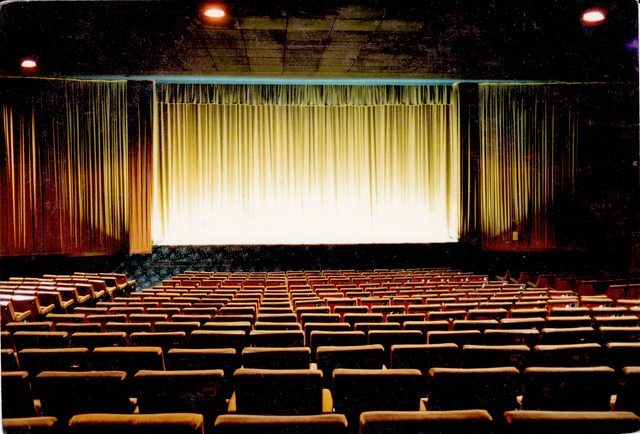 The Essoldo Cinema opened on 29th August 1938 with Dorothy Lamour in “The Hurricane”. This 2,200 seater (965 circle, 1235 stalls) was the flagship of Sol Scheckman’s Essoldo circuit. Situated on Westgate Road, known as ‘little Wardour Street’, it was opposite the Gaumont (now the Academy Newcastle) and adjacent to the Stoll Picture Theatre (now Tyne Theatre and Opera House) and the Pavilion Cinema. Film renters offices, including all the majors like M-G-M, 20th Century-Fox and United Artists, were located on Westgate Road also.

The Essoldo Cinema was designed by architect William Stockdale of North Shields and interior decoration was by M. Alexander & Son. It had full stage facilities and a tall fly tower and was equipped with a 2Manual Lafleur organ. There was a circle lounge cafe for the convenience of its patrons.

Throughout its lifetime it kept pace with all modern developments including Cinemascope, 6 track magnetic stereophonic sound, 70mm, Sensurround, Dolby Stereo etc. It was one of the few cinemas in the UK to boast 4 projectors in the 1960’s, ie two Cinemaccanica Victoria 8’s for 70mm Roadshow presentations and 2 Westars for 35mm General Releases.

The Essoldo Cinema was a first-run venue for much of its lifetime. Becoming a Roadshow venue in the 1950’s which included a season run of “The King And I”, M-G-M’s “Ben-Hur” opened in 1960. This was concurrent with London’s Empire Theatre, Leicester Square (the latter’s last presentation before it was subdivided into the Empire Ballroom and the smaller Empire cinema of today). “Ben-Hur” was to have run at the Essoldo Cinema for a whole year, but following a disagreement with M-G-M over terms it came off after 6 months - still impressive for a 1,975 seater (as it now was) in a relatively small provincial city.

Other ‘biggies’ were “My Fair Lady”, “Doctor Zhivago”, “The Battle of the Bulge”, “Far From The Madding Crowd” and “Paint Your Waggon” , which, apart from an extended run of “Woodstock” was the swansong of the Essoldo Cinema in its single screen form before it closed for twinning in February 1971.

The luxurious twin Essoldo Cinema re-opened after a six month closure with “Love Story” showing on a ‘showcase’ basis with separate performances and all seats fully bookable - in both theatres! The new capacities were: Essoldo 1 - 600 (the former stalls) Essoldo 2: 373 (the former rear circle). So there were now 973 seats with 2 screens as opposed to 1,975 with one…….a drastic loss of seating indeed!

It was, however, Essoldo’s new policy (though not in evidence at their less important cinemas) to emphasise comfort rather than capacity - not that the old Essoldo had ever been uncomfortable, of course – just it was now the 1970’s and cinema admissions were still falling dramatically. The main loss of seating was in the circle where the screen for Essoldo 2 was now situated within the Dress (Front) Circle area, which in itself had originally seated 400 patrons; consequently the centre and rear circle area had to be narrowed in order to make the new cinema symmetrical.

Patrons entering Essoldo 1, however, could not be prepared for a greater surprise - the stalls still had its full width and, at the stage end, almost its original height. Upon initial entry, the impression was given that one was entering the stalls area of a 2,000+ seater. This was an illusion, of course, for it seated only 600. Much of the rear stalls had been replaced by a new projection suite (Fedi projectors, 70mm, stereophonic sound), toilets and kiosks. The remainder of the stalls could still have seated about 900+ with conventional seating and legroom but instead, 600 luxury seats with headrests had been installed and there was sufficient legroom for one to stretch out fully – much more than the author has found in any of today’s much hyped multiplexes.

For that matter, the first time the author visited Essoldo 1 was for the first presentation after “Love Story” (which continued upstairs in Essoldo 2), this being the epic about Pearl Harbour, “Tora! Tora! Tora!”. Presented in 70mm and full 6 track stereo this 20th Century-Fox film was absolutely superb and neither before nor since has the author heard such effective stereo. The audience was literally ducking during the scene of the main attacks (I have not seen “Pearl Harbor” a recent film on the subject, but I doubt that it could have been as good as this!).

In 1974, ABC, now part of EMI, were looking for a location in the city because of problems with their Haymarket Theatre and their landlords, Newcastle University. They acquired the Essoldo Cinema and programmed it in conjunction with the Haymarket Theatre.

The occasional special presentation still played at the ABC, Westgate Road. By the 1980’s, however, the glory days were over. Video had dealt a final blow (almost) to British Cinema. Ironically, when admissions started to rise again in 1985, Thorn-EMI, the umbrella company of ABC put its cinema division, along with Elstree Studios, EMI Films (formerly ABPC) and Pathe Equipment, on the market.

Against everyone’s wishes the Cannon Group obtained the organisation and, always strapped for cash, that ‘infra dig’ company went on an asset stripping mission. The former Essoldo Cinema was one of the casualties when they closed in on 11th January 1990.

Uploaded to the photos section are the following:–

Hi – just wondering if anybody knows when the 1970 version of Scrooge played in Newcastle- it was released in Dec 1970 – despite an exhaustive search of the Evening Chronicles – I can’t find a thing – can anybody shed any light on this ????

I wanted to reply to Fabian_Breckels' comment but it seems you can’t do that. I was reading today about the Odeon cinema collapse in Newcastle and thinking back to when I was a student there (1986-89) and which other cinema I used to attend. It was the ABC/Cannon and the one film I remember seeing there was Fatal Attraction. The cinema was packed. 5 of us turned up and we all had to sit separately! I thought it was interesting that you were a student at the same time and remember that movie particualarly the same as me. Anyway I just wanted to share and say how sad I am about the Odeon cinema being torn down. So many memories!

Remember going to see my fav film here in cine 1 in 70mm (Where Eagles Dare) during the seventies… always a nice cinema to visit.

A memory of being on stage during a WW2 bombing raid:–