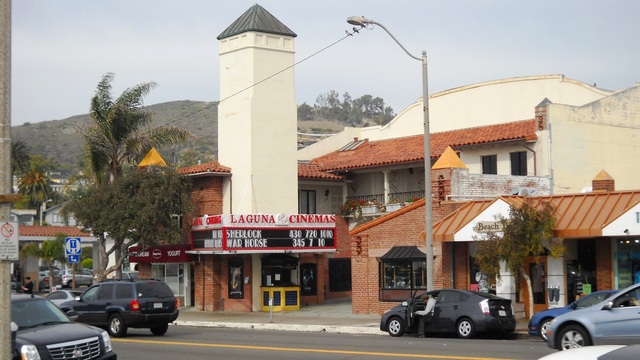 The only movie house in this town known as an artists colony, this theater opened as the Lynn Theatre in 1923 at a cost of $12,000. It was erected three years before the Pacific Coast Highway, which it faces, was dedicated by Mary Pickford and Douglas Fairbanks. An early photo shows a rather plain façade and it was the remodeling in 1935 that gave it a distinctive tower and small tiled courtyard. It still retains its stage that was equipped to put on large productions.

In 1937 it became the South Coast Theatre and was operated by Principal Theaters Corp. of America until Pacific Theatres took over its operation in the late-1970’s. Edwards Theatres leased it in 1982, making it their 28th location. The auditorium was divided and refurbished including new seating and bathrooms.

The screens are small but elevated and the projection sharp, presenting an excellent view from every seat. The small balconies in each theatre have 25 loges. Edwards relinquished its operation in late-2000 and in early-2001 it was taken over by Regency Theatres. Its program is filled with first-run movies and art films on Saturday and Sunday mornings. It was closed August 30, 2015.

Having grown up in Laguna during the 50’s and 60’s I spent a good deal of time in this movie palace, most of it on Saturday for noon show of cartoons, shorts and a feature film. Not mentioned are the great murals located in several recessed alcoves on both sides of the theater, (now hidden by drapes) they depict important events from California’s history. Painted by two local artist in he 30’s, Al Dupont and David Rosen, both now passed. Al also painted the buried pirate treasure mural that was in the old Jolly Roger on PCH.

Nothing left of the Lynn / Laguna at 250 Ocean but a newish looking multi-story office building – right next to the Historical Society, by the way.

I’ve been working at the theater since summer 2008. I just thought I’d add some facts that haven’t been mentioned: We rarely ever go behind the theater where the stage is for four reasons: 1) It locks from the inside, so we have to climb over a wood post to open the door. 2) We can’t turn on the lights when there’s a movie playing, so we have to bring flashlight, and it’s pretty creepy sometimes. 3) We use it to store movie posters we don’t need any more. We also store a couple concession machines that are broken, like the nacho machine, the hotdog machine, and a snow cone machine. 4) Also, a couple people I’ve worked with say the’ve seen ghosts, and had posters fall off the rack. Some employees refuse to go back there. I remember hearing a rumor when I first started that someone had hanged himself behind the theater in the late 1950s. Also, there’s a small apartment up the stairs next to the projection room, that the owner occasionally sleeps in. The former owner of the theater gave it to him when he bought it.

A Historic Resources Inventory prepared for the State of Califronia in 1981 included the South Coast Theatre, and the report said that this this house opened as the New Lynn Theatre in 1935, and that the architect was James Conway. (This 9.8MB PDF file includes the data on the theater, along with numerous other buildings in Laguna Beach.)

It looks as though the 1930 rebuilding planned for Mr. Aufdenkamp by architect Walter J. Saunders was not carried out. The report also includes the information that the original Lynn Theatre, opened in 1915 on this same site, was moved to a lot on Ocean Avenue and operated there while construction of the new theater was underway. If the projected 1930 rebuilding of the original Lynn, which called for a large steel and concrete structure, had taken place, the building would probably not have been moved. The original Lynn was most likely a wood-framed building of the sort typical in Laguna Beach during its early years.

Although the Historic Resources report calls James Neil Conway a “distinguished theatre architect”, I’ve been unable to discover any other theaters he designed. Almost the only source of information about him on the Internet is this page from the Pacific Coast Architecture Database, and no theaters are among the five projects it lists. He was apparently a designer by profession, not a licensed architect. That means he would either have had a licensed engineer working with him on this project, or have had someone who was licensed to sign off on his plans, but I’ve been unable to discover who that was.

The Laguna South Coast Cinemas closed Sunday, August 30, 2015 after its operator, Regency Theatres, was unable to secure a longtime lease to make necessary renovations and upgrades.

Regency, which operates 28 other neighborhood theaters in Southern California and in Yuma, Ariz., said showing movies there was costly and less efficient because of outdated technology in the two-auditorium, 550-seat theater. Films had to be ordered in advance and selection was limited.

Lyndon Golin, president of Calabasas-based Regency, said that distributors no longer provides movies on 35mm film. Everything is digital, he said, and we can’t get a lease with terms to make the investment there. He said he’s been given no reason why his lease won’t be extended.

Closing the Laguna Beach theater not only leaves the town without a place for the public to see movies but also shuts one of the last beach movie theaters along the Southern California coast.

(Based on a story that appeared in the August 30, 2015 Orange County Register.)

Plans to renovate the South Coast were approved by the Laguna Beach Planning Commission on 1/6/2021. Rivian, an Irvine based electric car manufacturer, intend to reopen the venue, in late 2021, as a film, live event, meeting, and auto showroom space. The original stage, proscenium, and star shaped auditorium lighting fixture will be restored, but there will be a significant “repurposing” for the rest of the theatre. The current 653 seat twin layout will be converted back to a single auditorium and downsized to 127 seats. Further alterations include an elevator, skylights, a reconfigured lobby (doubling as a two vehicle showroom), and conversion of the second floor projection booth & storage areas to conference rooms. While Rivian has stated that there will be up to two movie screenings a week and the space will be made available for quarterly live events, it appears the venue’s primary use will be tied to their business interests. The Laguna Beach Historical Preservation Coalition has voiced their opposition to the plan.

Would be great to see some interior shots of the theatre. Did some just before it’s closure but even with the house lights up, the photos did not come out well.

JackCoursey: Circa 2009 I was friends with one of the managers Regency had at the theatre and attempted to get some interior shots one day before opening. Unfortunately, mine also came out poorly. The auditoriums were far too dark (even with the lights up), the projection booth was so small (dominated by a shared projection platter) that it was impossible to obtain a decent angle, and the original stage area was behind a padlocked door. If there are any interior photos out there, I would speculate they are either pre twinning or from the current remodel project, as it was a very difficult venue to photograph in its' latter years as a cinema.