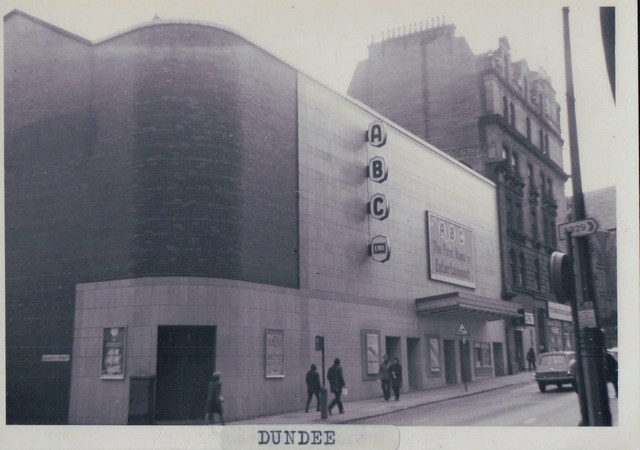 Built on the site of the Majestic Cinema which was destroyed by fire on 28th August 1941 (and has its own page on Cinema Treasures). The Capitol Cinema opened on 6th August 1956 with a single screen that had 1,300 seats on a stadium plan (with a raised stepped section at the rear, rather than an overhanging balcony). It was launched as the new flagship of the Dundee based cinema magnate J.B. Milne, whose circuit, which extended throughout Scotland, included several Dundee cinemas.

Associated British Cinemas(ABC), who had long been seeking a site for a city centre cinema to replace their outdated and badly sited Plaza Cinema, acquired the Capitol Cinema from J.B. Milne in 1958. Following extensive alterations, the ABC Dundee was re-opened in 1959 with "South Pacific" which played for a lengthy run in Todd-AO. During the 1960’s the ABC enjoyed great success both with circuit releases and with extended roadshow runs of films such as "Ben Hur" "Where Eagles Dare" and "Alfred the Great", all shown in 70mm on the huge screen.

In common with other cinemas, business had been declining during the late-1960’s and in the early-1970’s the ABC was split into two screens by means of a central dividing wall. No longer boasting it’s massive 70mm screen, the sense of occasion induced by attending a major film in a large auditorium was lost.

Following the sale of EMI’s film and theatre operations, the ABC became a Cannon, an MGM, then finally reverted to the ABC name for it’s last years. With it’s small vertical perspex name sign, the building looked sadly diminished during it’s last years as a cinema. With the coming of multiplex cinemas to the city, the former Capitol Cinema finally succumbed to the inevitable. The interior was gutted, windows inserted into the tiled fascia, and almost all traces of cinema disappeared as the Capitol Cinema became a Yates bar complex, which opened in November 2000 and had closed by 2012. It became a pub in the J.D. Wetherspoon chain named ‘The Capitol’. It was offer ‘For Sale’ or ‘To Let’ in 2017.

I would like to contact contributor Donald J Kirkbryde regarding his DUNDEE CINEMA HISTORY RESEARCH NOTES, 1999. I wonder if this can be done via ‘Cinema Treasures’? Fingers crossed! Jimmy Smith (Jester)