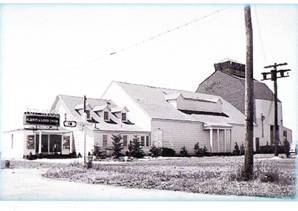 The theatre was on a former estate which had been converted into a country club. When the club was disbanded the owner, Edith Gordon, rebuilt the old club house into a modern summer theatre. It was call the Sayville Summer Playhouse and began screening films on 5th June 1948. First screening second run and finally art house films. The theatre burned down in March 1959.

As I mentioned in my comments on the Sayville Opera House a series of fires in the late-1950’s and early-1960’s destroyed many of the historical buildings in the village.

When the Playhouse was “alive” they used to advertise “at the foot of Candee Avenue” which was at the Great South Bay in the middle of nowhere. Having done the research the location estate/country club/summer theatre makes sense.

There were a series of fires in Sayville in 1958, none of which were mentioned in the local paper, the Suffolk News. Presumably they were trying to down play them. Last ad for the Playhouse, at that time the Art Playhouse, was for August 29, 1958.

A side note, when the Playhouse opened for films on June 5, 1948, the other theater in town, the Sayville, doubled the size of its ad.

When the Playhouse was purchased in 1947 by James Poro, Manager of the East Islip Theater, is was rumored that the price was $50,000. At that time Mr. Poro indicated that he would spend $ 75,000 to upgrade the theater to include a loge and 750 seats. The article about the opening didn’t confirm the seating capacity.

June 4th, 1948 grand opening ad has been uploaded in the photo section for this cinema. It had an TV lounge and free parking.