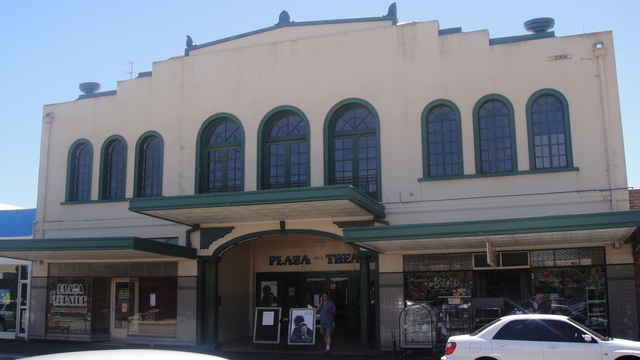 Located in the central Victoria town of Kyabram. The Kyabram Theatre opened on 25th May 1929 with an MGM double-bill; William Haynes in “Spring Fever” and Jackie Coogan in “The Bugle Call”. Seating was provided for 750 in the stalls and 270 in the circle. The stalls area was a flat floor, with removable seating, to allow for dancing. The Kyabram Theatre also boasted a large ballroom over the entrance at circle level. The Kyabram Theatre was closed on 27th April 1967.

It was converted into a restaurant named the ‘Copper Kettle’, and dances were also held in the building, but eventually, the building fell into disuse. In 1982, it was taken over by Kyabram Youth Club. Second-hand seating and carpeting was installed which had come from the Metro Theatre, Collins Street Melbourne.

It was re-opened as the Plaza Theatre in October 1983 with “Superman, The Movie”. In 1988 alterations were carried out, with seating in the circle extended forward to a new proscenium, and stage facilities and dressing rooms were added. The former rear stalls area is in use as a rehearsal room. It was renovated in November 2001.

Today it is operated by the local council as a live theatre and first run cinema.