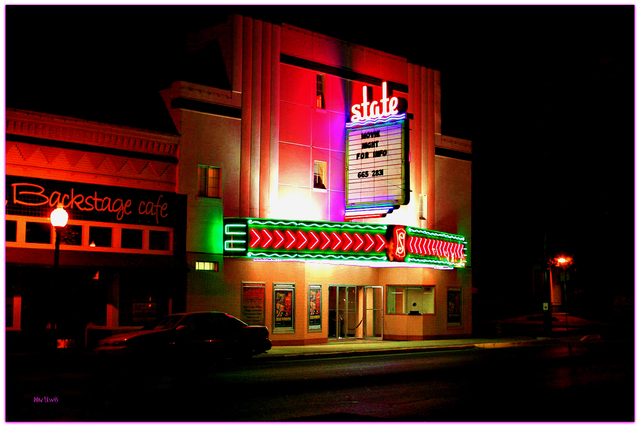 The Majestic Theater(as originally named) may have been built on the site before 1919, but that’s the earliest provable date. It was Gainesville’s major playhouse until a fire destroyed the building in 1932.

The "Greater Majestic" was reconstructed later the same year, and it showed both movies and live proformances. Again it was gutted by fire, leaving only the exterior walls.

In 1938, as if a name change might bring better luck, they tried again with the "State" to show motion pictures. Its Art Deco style remains today. The facility is available to rent for all kinds of private and public functions. Full movie projection capability is planned in the near future as well as opportunities for organizations to present concerts, plays, festivals, ballet, and orchestra profomances. Current projects can be seen at the theater’s website.

The Historic State, 200 East California had the biggest celebration
ever, during its grand opening October, 27, 1938.
The A. V. Wade Family almost built the structure from ground up.
The State has survived the ravages of time, so far.
Hopefully, it can continue to keep its place in minds of its people.
The State originally opened as Majestic, by joe Hunnicut January 11,
1915
This was acually the third Majestic, the first was opened in 1905 by
the Harrison brothers on the east side of the square, on its North
End at California.
The Harrison’s also operated a second theate Favorite, next door to
their Majestic, but both were gone within two years.
The second Majestic for the city was opened in October, 1907 at 113 East California, by Hoyt & Ruby Kirkpatrick, who also was opened the
Happy Hour theater at 114 north Dixon, which lasted only six months.
The Kirkpaticks headed out for Fort Smith, Arkansas in March, 1908,
selling out to Henry Bertram.
In 1912, Joe Poole & W. L. Greenhill who was also running movies at
the old Opera House on South Rusk joined Bertram for the next 3 years
Joe Hunnicut took over operations after Christmas 1914, promply shut
down the doors, remodeled the site at 300 east California, reopened
the Majestic with an entire city celebration.
A. V. Wade came to town in 1924, starting years of movie operations
The Majestic was completely refurbished, with a magnificent grand
opening,September, 8, 1932.
The State took over the historic location, October, 27, 1938.
The Wades moved on in 1951, selling out to Frontier theaters from
Dallas, who operated the showplace 18 years.
Commonwealth Theaters, Kansas City, bought the State in 1969, and
kept it rolling until 1986, when they sold out to the Bartons.
Since that time, the theater has had its ups, and downs, but it is
nice to drive through Gainsville, remembering past glory when the
State was king. billy holcomb, denison, texas

A 1990 photo of the State Theater in Gainesville showing “The Memphis Belle” and “Predator 2”.

I have a photo postcard of the Majestic, postmarked March 20, 1915. It says “this is our new Majestic Theater and the bunch…” and has a group of men in front of the theater. The feature presentation is “How Cissy Made Good,” with “Runaway Jane” and Charlie Chaplin’s “His New Job” advertised by large posters out front. This is interesting because Keystone never advertised Charlie’s name on their posters, and here, for his first Essanay film, he’s billed as “Mr. Charles Chaplin [in] ‘His New Job.”

Sure, Don
Here it is:

Priceless!! Thanks for sharing.

A 1938 view of the State Theater when it was brand new and recent view .

From 2009, a night time view of the State Theater at closing time with all the neon glowing.

I worked as the projectionist at the State, Plaza & Chief theaters from 1953 through 1955. It’s good to see that they are remembered. Bill Maughan