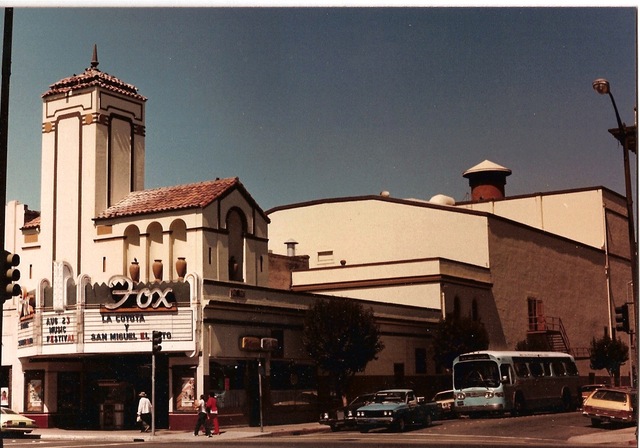 This beautiful theatre began life as the California Theatre, a single screen 1,000 seat theatre in 1923. It was later triplexed and eventually closed. The theatre reopened on May 1, 2008 with “Iron Man”.

Sadly, due to the economic downturn, the Fox Theatre was closed at the beginning of September 2009. It was reopened at the end of September 2016 for a film festival, but soon closed.

The City of Watsonville did not express much interest in preserving this magnisicent theatre. It is too bad. While the Mello Center is a decent performing arts facility, the FOX was intact and ready to go.

I hope some saviour can pull into town and save the Fox such as has happened in Salinas with the Fox-California Theatre and in Monterey at the Golden State Theatre. The Watsonville Fox is the ONLY remaining 1920s movie palace in Santa Cruz County (the Santa Cruz Del Mar was much later—around 1936 or so.)

We had looked into the possibility of moving the Wurlitzer organ from the Fox California in Salinas to the Fox Watsonville, but with the closure of the Watsonville Fox, that hope was dashed and the organ given to another organ preservation group in Indiana.

On the KSCO website, there is a report from September 2006 which reports the Fox being in escrow, about to sell to a firm owned by Mark Calvano for $2.25M.

Good news indeed. The Fox opened as the California Theatre in 1923 and was designed by Lansburgh.

WATSONVILLE â€" Signaling renewed hope for the long-awaited revitalization of downtown Watsonville, the owners of the county’s oldest movie house are reopening the historic Fox Theatre after a 2Â½-year dormancy.

The owners, Henry Garcia Jr. and Jim and Doris Andrade, who also own the Green Valley Cinemas in Watsonville, are putting the final touches on the art deco, Spanish Colonial building. If inspections and license renewals go as planned, doors should open in January.

“It’s great news to have the Fox opening again,” said Carlos Palacios, Watsonville city manager. “With the opening of the new Civic Plaza building and some new buildings going up around it, hopefully we will be seeing more activity downtown.”

Nearby, the city’s new council chambers will be open in January and new courts and a library are opening in February and March. Although there haven’t been a lot of new leases signed, there is more commercial interest in downtown generally, Palacios said.

The timing seems to be right, said Dawit Taddese, general manager of the Green Valley Cinema theater who is overseeing the Fox Theatre project. “Downtown is becoming a very different place. There is the commitment from the city, and we want to be part of it.”

Just a few years ago, however, ticket sales weren’t enough to keep the doors open and the owners shuttered the Fox to focus on their newer, more profitable eight-cinema complex, which opened in 1999 on Green Valley Road. Informally on the market, the Fox nearly sold earlier this year to Mark Calvano, a Silicon Valley real estate developer. The plan fell through in escrow.

The 84-year-old, former one-screen theater once held more than 1,000 seats and was eyed as a possible regional performance venue. The 1989 earthquake caused extensive damage, however, and in the interim, the Henry Mello Center was built nearby. Eventually, the Fox was split to accommodate two additional screens in the balconies. Each of the upstairs screens now seats about 100 people while the main screen seats more than 400.

There wasn’t a significant amount of work to be done to reopen this time, Taddese said.

Moviegoers, however, will get a different experience at the old theater, which was once called “The California.” Elaborate ceiling chandeliers, interior gold-painted molding and wall sconces â€" many features that are original to the 1923 structure â€" create a historic milieu.

“Because of the way the lighting is, it definitely gives you a different feel from what you’d see in a normal theater,” Taddese said. “It gives you that feeling like you’re in a different time.”

The owners are still discussing what kind of movies to show at the theater. Before it closed, the Fox often showed Spanish language films. In 2002, it was the only theater in Northern California to run a Spanish version of “Harry Potter and the Chamber of Secrets,” the second film based on the popular children’s books about an apprentice wizard.

In 2001, when it ran the first Harry Potter film in Spanish, the theater sold 3,000 tickets during opening week.

With only eight screens in the city, however, there are plenty of films that need a venue, Taddese said.

“We’re looking at movies that we’d like to run at the Green Valley theater, and there’s just not space for it,” he said.

A manager has been hired but other jobs won’t be filled until the Fox is ready to open. Green Valley Cinemas employs about 25 people; the Fox would need about eight or nine to operate. Some of those jobs may be filled by people already employed at Green Valley, Taddese said.

Status should be changed to Open. They reopened at the end of April 2008 showing 1st run movies, after doing some light renovations (new carpet, paint, etc.) Their website is at www.foxtheatre3.com

The original CALIFORNIA metal and milk glass marquee sign from 1923 has been brought up from the Fox’s understage basement and is now on display high on the wall of the restaurant which occupies the former outer lobby area. There are also framed historic photos below it on the same wall.

Probably a combination of the loss of businesses in downtown Watsonville and also not necessarily the right owner for the building.

I managed to see one movie while it was reopened. “Bangkok Dangerous” with Nicholas Cage was the only flick I had time to see after work one night,but I figured if it gave me a chance to see the interior why not.
Unfourtunately, I couldnt see much. The main auditorium (possibly because I was one of 3 people there) was almost completely dark with just the lobby light and the light of teh screen to guide you in.Not only giving the place an omnious spooky air but making the big drafty room seem even colder. The screen and projection was good quality tho the sound was way to loud! I could feel the gunshot blasts rattling tehf loor underneathe my feet.

The seats were worn but not uncomfortable. A wooden structure, painted white (?) and gold(?) about 4 feet high was on the floor maybe 10 feet away from the screen. The screen seemed to be framed with soem kind of lightly painted proscenium set piece. I was curious if it matched the great locally themed art in the lobby but without a flashlight there was no way to tell.

The interior signage seemed to be from a couple different decades. Restroom signs of one era auditorium signs from another. But it gave teh place a kindve homey feel.

I hope at some point it can be reopened and that until then the owners are able to keep up the place. Though as busy as they seem to be at Green Valley Cinema that might be difficult.

This theater is REOPENING NEXT WEEK!!! Please see more information here – this festival is also the re-launch of this lovely venue: