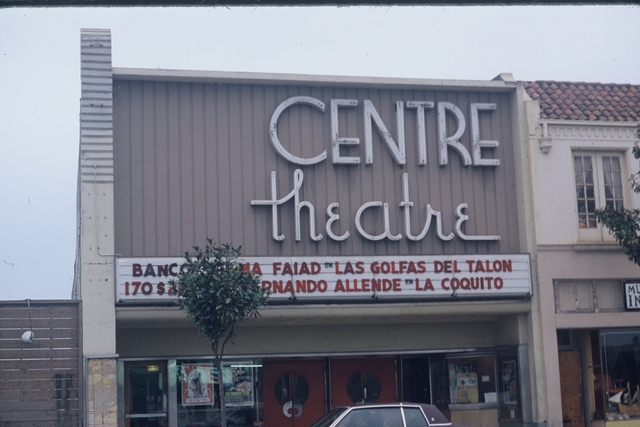 Known only very briefly by its first name, Rodeo Theatre, the Centre Theatre was built right after WWII. Its flat facade, with name in neon script and reader board flush with the surface, stylistically foretold theatre design of the next decade. A very shallow entrance featured a terrazzo sidewalk with stars and zig-zag motif patterns leading the eye to the two pair of red entrance doors with halfmoon-shaped windows.

In its later years, the Centre Theatre showed Spanish language product, and eventually fell way behind in maintenance. There were complaints of both rats and urine. Cited by the city as being in violation of sanitation regulations, the theatre closed in 1982 or 1983. Despite the apparently terrible conditions inside, the neon always worked until the end, flashing pink and white.

In 1986 the Centre Theatre was demolished, along with several other adjacent old buildings, to make way for a new Post Office. During the demolition, I was able to see that the Centre Theatre had a stadium seating configuration, and that the predominent auditorium color had been a sort of burgundy or deep Pompeiian red.

A portion of the terrazzo survived until the entire sidewalk on that block was redone a few years later.

That image in the above post is the same image shown in black and white at the top of this page. I posted it in the early days of Cinematreasures on behalf of Jack Tillmany. It’s from his collection. How it got on Classic American Images is anyone’s guess.

I recently was shown a photo of the Centre when it was new, and originally it had a two-sided readerboard which hung out over the sidewalk. Above it was a neon vertical sign, in the shape of an arrow pointing downward and toward the building. This whole assembly was mounted on the ribbed concrete “fin” on the Left edge of the facade, visible in the above color photo I took in 1982.

In 1953 the operator of the Centre was Homer I. Tegtmeier, who also operated the Vogue Theatre in Salinas. Tegtmeier was one of many exhibitors who testified at the 1953 hearings of the U.S. Senate Small Business Committee that was investigating the trade practices of motion picture exhibitors. Another round of hearings was done in 1956 as well.