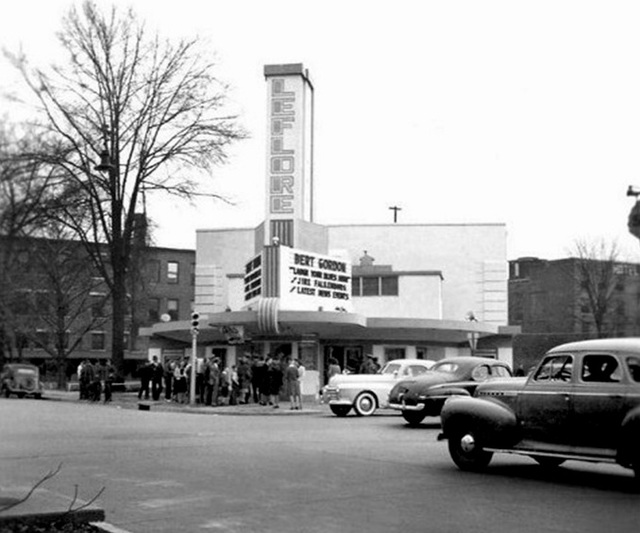 The Leflore Theatre was opened April 15, 1942 with Henry Fonda in “The Male Animal”. It was operated by Paramount-Richards and later by Gulf States Theaters.

This opened on April 15th, 1942. Grand opening ad in the photo section.

The Leflore Theatre was named by Paramount-Richards for the Chief of the Choctaw tribe, Greenwood Leflore which was also the county in which Greenwood sits. The building sits on the Choctaw Trail. Designed by architect T. Cooper Van Antwerp and supervising architect Jack T. Knight, the pair called for Indian-centric artifacts and wildlife murals and artifacts Greenwood and Delta scenes to accentuate the theatre. On March 21, 1954, the theatre was converted to a widescreen format to play CinemaScope films beginning with “The Robe.”

This entry fails to mention why the Leflore is remembered in Greenwood. In July of 1964 it became part of Civil Rights history. The theatre had an all-White policy as of July 5, 1964 but sold a ticket to an African American patron citing the Civil Rights Act. That patron decided to attend another film at the Leflore on July 9, 1964 and the crowd was ready and beat the man. On July 16th and July 26th, similar incidents occurred but on,July 26th more than 200 of the town’s citizens showed up to display their displeasure and attempted to make sure that the patrons never returned. The desegregation efforts ended up in the 5th Circuit Court that September. Gulf States, the owner of the competing theatre, the Paramount, said that integration would harm their business.

The Leflore Theatre became part of ABC Theatres with Paramount Gulf in 1966. It closed for the final time on April 12, 1967 with “Easy Come, Easy Go” with Elvis Presley when Gulf States, operator of the competing Paramount, bought the theater. Gulf talked for many months about its plans to make the Leflore a road show, top-tier location. But it became fairly obvious that Gulf States would never open the theatre and simply use the Paramount as the main theater. It was torn down in December of 1968.