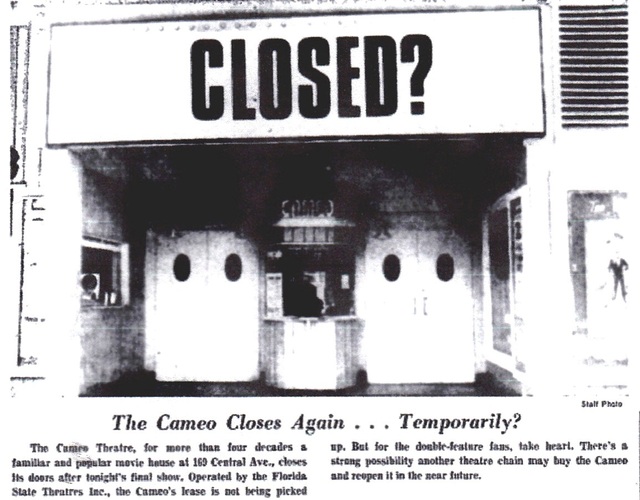 Located in downtown St. Petersburg, the Rex Theatre was operating by 1911. It was renamed Cameo Theatre on November 4, 1928 and by 1941 was operated by Paramount Pictures Inc. through their subsidiary E.J. Sparks. In later years it had several brushes with the law when it operated as an adult movie theatre. It was closed on June 2, 1976. Now long gone.

Aaah yes! The Cameo. In 1969 I drove over from Tampa to see “I Am Curious (Yellow)” and I recall quite a number of senior citizens in the audience. This boring b&w film was pretty controversial for it’s time with some full frontal nudity…about the only reason it played for months and months in many markets.

The entrance into the Cameo’s audiorium was unique for a movie theatre. You walked up an incline right into the center of the auditorim. There were a few rows of seating from the entrance towards the front, and on either side of the entrance on up to the rear wall. Similiar to entering a stadium but without stadium seating.

When the theatre closed it was used for stage performances for some time although I can’t remember if it was still called the Cameo. Towards the late 1980s I saw a live performance of the hilarious “El Grande De Coca Cola.” It was strange seeing the auditorium without the screen. It looked somewhat smaller than I had remembered from about 20 years before.

Thanks Nick,Surprized “YELLOW” wasn’t banned there.

It was a strange set-up. I did a service call once while it was operating film. The ceiling had a peak which made audio sound poor in the room. I remember I am Curious Yellow which being distributed by Preston Henn, the owner of the world’s largest multiplex drive-in in Ft. Lauderdale….To get one “extra” show a day for Curious was a recommended changeover which allowed dumping 15 – 20 minutes from the feature…..the film storyline was that loose….

Just posted photo of temporary closing of the Cameo.

ANOTHER NAME WAS CAMEO ART THEATRE

The CAMEO THEATRE was another “strange” theatre in St. Petersburg. Yes, the roof came to a point. I have pictures of the roof that I took from an adjacent building. I also have a photo of the collapsed roof. The theatre sat vacant and unused for years and the roof leaked and caused the rot that brought it down. An interesting note is that the toilet for the projection booth sat on an incline and if you sat on the toilet you looked down on the projectors.

You had to climb a ladder at the back of the auditorium to get to the booth.

This reopened as Cameo on November 4th, 1928

On September 2, 1974, the Cameo Theatre flipped the table after running X rated films and began stunting with second-run films, which reopened with the 1972 film “Pete N Tillie”. However, that stunt didn’t last for so long, and flipped back to X rated films during the week of June 22, 1975, but had another lawsuit later that September. The Cameo’s short-lived stunting sequences had flopped big time. The following year, The Cameo Theatre on June 2, 1976 had failed to pay fines in obscenity cases. The theater was forced to close its doors for the final time after jury trials and convictions brought fines from an estimate total of $43,500.