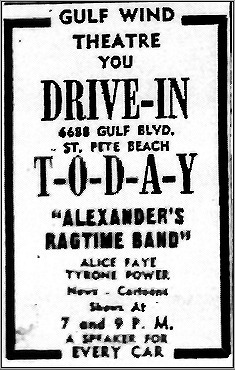 The Gulf Winds Drive-In was one of the first drive-in theaters in the area. It was opened around 1949 and had a car capacity for 700. It was operated by O.W. Philpott who owned and operated theatres in Clearwater & Winter Haven. Due to the high demand for land on the beachfront barrier islands, the drive-in likely didn’t survive past the 1960’s.

No trace of it remains on its location on Gulf Boulevard, between 66th Street and 67th Street.