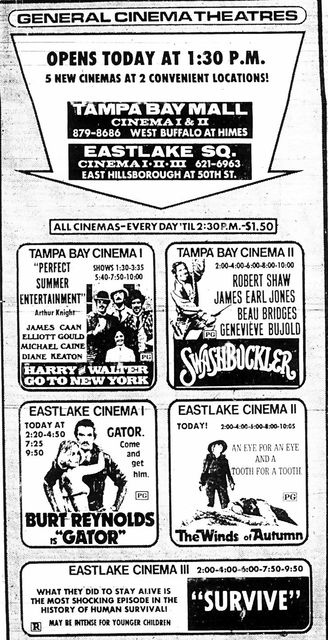 There’s a photo of the opening day ad here: http://cinematreasures.org/theaters/33024

Apparently The Tampa Bay Mall I & II and The Eastlake Square Cinemas I II & III opened the same day, August 6, 1976.

I worked at this triplex when I was in college in the late 1980’s. The manager was Mr. Guthrie (John Guthrie?) who was originally from Tuscan, AZ. The assistant manager was Karen.

It was fun and scary to change the one foot high marquee letters (climbling up a ladder and all) on Thursday nights around 11 PM. This was needed to update films and also the showtimes.

The mall had a solid business in the late 1980’s. There was a really kool Italian family (via Sheepshead Bay, Brooklyn) that owned a pizza shop nearby in the mall.

All memories now! I may find a few old pictures I could scan in the future. I hope I still have them.

Thanks imissGCC! Sure is nice to hear from a former employee. Sadly enough no other employees from any theatre in Tampa have ever posted comments on CT (aside from myself who worked at the Dale Mabry Drive-In.) When you have time please scan any photos of the theatre you might have…would love to see them.

I worked at the Eastlake Cinema back in the late 80’s. I worked with a girl from high school named Trish. I had so much fun during busy tickets sales and the line would wrap around the corner. I think ticket prices were $3.75 and we had no cash register. Tickets were on a big spool that came out from a punch button. Popcorn was sold in buckets and our lemonade was named Lotta Lemon. My favorite part was the cute pinstriped shirts and maroon vest and bowtie we had to wear. Movies playing around that time…Purple Rain, An American Tale…I also remember bartering our free tickets with the other mall employees…ORANGE JULIUS!! I don’t rememeber the manager’s name at the time. Bigger guy and really nice!! Maybe John?? I also remember we had a projectionist that never came out of the booth. Wow the stuff I can remember sometimes amazes me!!

MelodyP, Thanks for the memories! So nice to hear from another former Eastlake employee. It’s extremely rare to see comments from employees of various theatres in the Tampa area. So when an employee does post a comment it’s always a treat to read. Sounds like you had some fun times at Eastlake!

This was the movie complex that i went to see Star Wars at in 1977 for my birthday. It hold’s a golden treasure for my childhood memory. I have seen a ton of films at Eastlake Square, like The Changeling with George C. Scott, and Jaws 2. The late 1970’s were just a simple way of going to the movies, you were paying only 2.50, and giving a plain admission ticket stub. Right across the cinema was the Quarterdeck lounge and bar. I just do not like today’s movies, they are just full of computer graphic imaging and do not have that electricity of breaking new grounds like the 1970’s and 1980’s films did.

I remember going to this theater from the time I moved to Tampa in the early 80s, until the early 90s. My best memory was getting my brother out of class at King High to catch the opening of Return of the Jedi. We thought we’d gotten away with it until our dad opened the next day’s Tribune and there we were, captured in a picture!

Some films I remember seeing at Eastlake:

I have so many memories of Eastlake Mall, my father was the projectionist at Easlake Square 3 my entire childhood, and MelodyP, you’re not wrong! He never left the booth, his name was Bob. Me and my friends watched so many movies here! I watched my first rated R movie here, all of the Star Wars films, I even worked there when I was a junior in high school, John Flowers was the manager then and there was an English guy named Justin that was the assistant manager. I loved eating at Scottos pizza and Orange Julius! I bought my first pair of Air Jordan’s at Foot Locker and my first pair of parachute pants from Merry-Go-Round. Sure do miss that mall but it’s left me with a lifetime of great memories.

I worked at Eastlake, As an usher, popcorn maker and marquee changer. I helped open it with the manager Waldo Beck. General Cinema fired everybody when the manager got caught stealing from the concession stand.