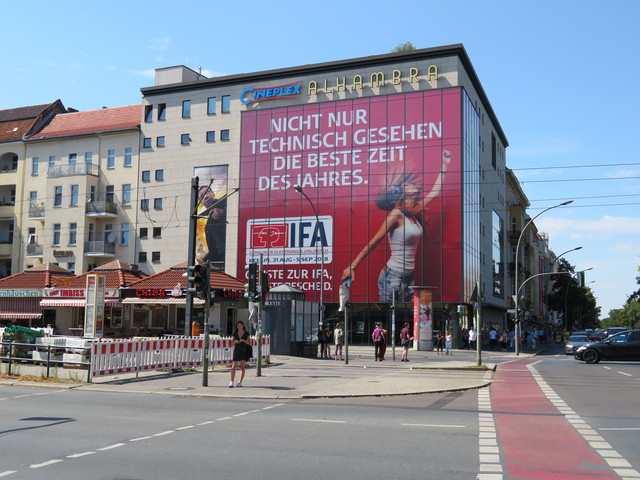 There are actually three generations of the Alhambra at this location in Berlin. The first one originated in the expansion of the 300 seat 1916-era Apollo Kino to 950 seats by architect Max Bischoff and its re-naming to Alhambra Kino. It was totally destroyed in World War II and rebuilt in 1953 to the designs of architects Hans Bielenberg and Helmut Ollk. Seating was provided in orchestra and balcony levels. It was closed in 2000 and demolished in 2001, and has it’s own page on Cinema Treasures.

The 4 Alhambra Cinemas at this location were:–

My wife, who was born in Berlin, saw Mad Max 2 at the Alhambra in 1981. It’s sad to know that they also tear down beautiful old theaters and buildings in Europe too.

More infos and photographs on this theater (and many others) can be found on the non profit, German language only Berlin Movie Theater Guide – www.kinokompendium.de:
Alhambra Multiplex (since 2002) or
Alhambra one screen (1953 until 2nd September 1999)

Exterior and lobby photographs from July 2013.