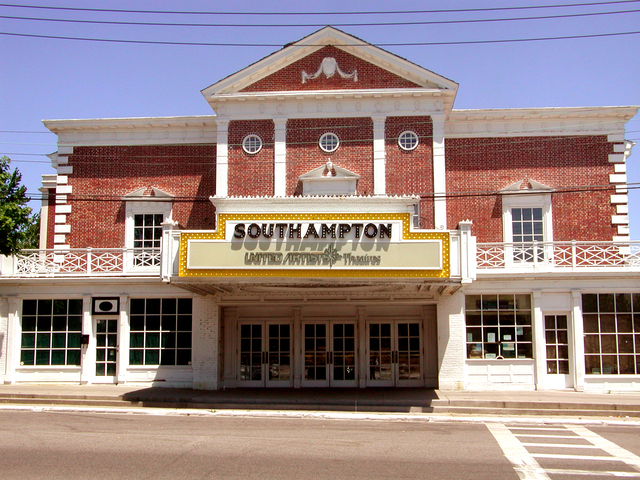 This Colonial-style movie house was opened by Glynn Theatres in 1932 as the 1,000-seat Southhampton Theatre. It was operated by Prudential Circuit in the 1940’s. It was split into a fourplex in the 1990’s and was operated by United Artists Theatres. They then converted the basement dressing rooms in a fifth screen, which had its own outside entrance.

Eventually they wanted to build a purpose built theatre out of town, but this was refused permission. They then demolished the auditorium block of the United Artists Southampton. Using the original facade, they built four modern screens behind it, which is now operated by Regal Entertainment Group as the Southampton 4 Theatres, and has its own page on Cinema Treasures.

I worked on the underrated Alan Alda film “Sweet Liberty” at this theater, which is seen in the closing moments of the film as the premiere site of the film-within-the-film, on a 7pm to 7am shoot. (For the last actor shot coming out of the theater to cheering people on the sidewalk, which was then-rising-star Michelle Pfeiffer, a black cloth had to be secured around the marquee to block out the early morning sunlight!)

As a P.A. on this shoot, i was aware that movie royalty was there, in her trailer in the parking lot behind the theater: Lillian Gish!!!! Too bad my placement was somewhere else when she did her scene. She passed away about a year or so later.

As a kid in the 60’s (now am a kid in the 00’s!) this was a beautiful one screen theater….when they mangled it by splitting it up into a multiplex (early 80’s IIRC) I swore never to go back, and haven’t. Such a shame. I wonder if the pizza joint is still next door to the right in the picture. Many years ago the Mercedes dealer was slightly to the left. Why do I remember these things?

This theater was often the furthest I would drive out from Westhampton Beach to see a movie. Some special movie memories include the re-release of THE EMPIRE STRIKES BACK in 1981, MEDITERRANEO in 1992 and TWIN PEAKS: FIRE WALK WITH ME; me and my friends getting completely freaked out by David Lynch’s visions.

But the best memory of all was L.A. CONFIDENTIAL in 1997 – went to see it with an old friend and in the theater, not far from us, was Roy Scheider and his wife (he’s a permanent resident of Sagaponeck, L.I.). On top of that, my friend had actually been nanny to his kids when she lived in L.A. during his SEAQUEST days. So when the movie was over, she introduced me to him outside the theater. It’s the only full-length conversation I’ve ever had with a celebrity. A great actor and a very nice man!

The quadded theatre opened on May 21st, 1996 with Mission: Impossible and opening three days later, Spy Hard and Jane Eyre. To celebrate the opening, special free weekend showings of Toy Story, All Dogs Go To Heaven 2 and Babe also ran.

Originally a Glynn theater perpetuated in the Newsday Movie Timetables well into the 1950’s by which point it was Prudential.

I’ve added a photo dated 1935 of the interior of the original Southampton Theatre.

The theater was originally constructed in 1932 by Mike Glynne. The demolition of all but the facade and the creation of four new auditoriums probably occurred in the 1990s.

Chandeliers from the original (see photo section) reportedly found a home in a night club when the auditorium was twinned.