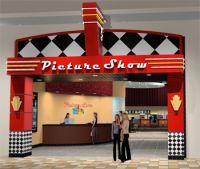 Opened June 15, 1979 as a quad by General Cinema, it was taken over by Harkins Theaters around 1998, expanded eventually to seven screens, and then closed in 2004. It was reopened in 2010 by Picture Show Entertainments.

It was there at least as early as 1980; I saw The Empire Strikes Back there when it came out.

This theater was reopened and renovated by Picture Show Theaters. Other then updated stadium seating and a fresh coat of paint it looks the same. But I am glad to see the theater put to use.

The original theatre was opened when the mall opened and was run by General Cinemas and later sold to Harkens sometime around the late 1980’s and closed in the early 2000’s due to Harkens North Valley 16 3 miles away. Picture Show took ownership in 2010 and renovated the entire theatre with stadium seating and all digital projectors. Picture show used this theatre for there new premium theater concept showing new movies and luxury seating as they where a small family budget 2nd run theatre chain.

Probably time to update the summary above as a new theatre was not built in its place, the same one was renovated.

Also it appears this theater is open so status should be changed to open.

The theater is now a part of a small chain call Picture Show Entertainment; the official website is: http://pictureshowent.com/.

Uploaded a photo of the entrance. Remember the day when the name of the theater was displayed not the parent company? And with all the changes happening the updates must cost a pretty penny.

My brother Tim Ralston worked here in the early 80’s. He took a couple of pictures and they might be the only photographic evidence of the original theater near the food court. https://flic.kr/p/wL5oRA https://flic.kr/p/vRwnFn