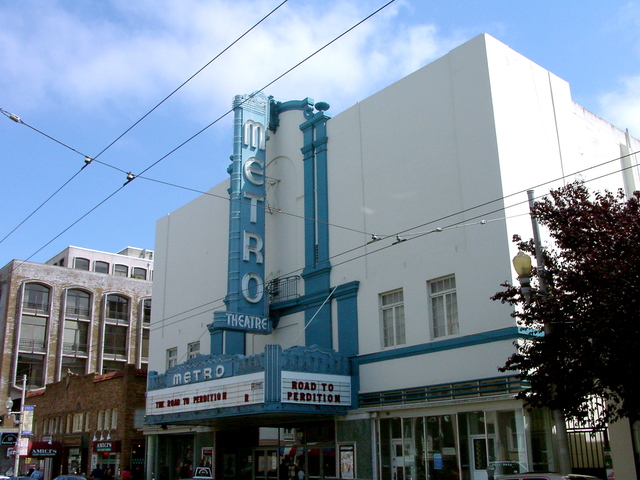 Opened as the Metropolitan Theater on April 23, 1924 with “The Fighting Coward”, a second-run attraction. It was built by Samuel H. Levin, and, from the beginning, was a key link in his San Francisco Theatres Inc. chain, which originally consisted of the Alexandria, Coliseum, Metro, Harding, Balboa and Vogue (in 1949, the Coronet was added to the group.)

In 1941, the Metropolitan Theater was extensively remodelled, both inside and out, and it re-opened on June 7, 1941 with Margaret Sullivan in “Back Street” & Gene Tierney in “Tobacco Road”, its name now shortened to Metro Theatre.

In the mid-1950’s the Metro Theatre was home to the just emerging San Francisco Film Festival, and eventually upgraded to a first run venue, with bookings usually carefully chosen so as to maintain its image as one of quality and prestige, and far better maintained than most of its siblings elsewhere in San Francisco.

The Metro Theatre continued to operate as a single screen theatre until its closure in October 2006. In June 2009, the developer extended a commitment to preserve some of the historic features inside, including a series of murals by interior designer Anthony Heinsbergen, Ioinic columns, grilles and urns on the stage. It was converterd into a gymnasium.

“The Graduate” opened here fifty years ago today. The film went on to play (a venue record?) 46 weeks. And to commemorate the classic film’s golden anniversary, here’s a new retrospective article which includes some exhibition history (and other) details.

when I was vacationing in San Francisco the Spring of 1998 I saw Titanic for I think the 12th time. I think this might have bee this theater. I remember it was at a decent size theater om Union or Chestnut Sts.

bigjoe59….If I remember correctly, Titanic opened around Christmas time in 1997 at the Presidio on Chestnut St and had a fairly long run of several months. You probably saw it there.

The large theater across the street from the Presido theater with the large screen and THX sound was the Cinema 21. Both were operated by Century theatres. Titanic showed at both these theaters for long runs. Both theaters are still there, but have since been split into smaller auditoriums. Cinema 21 is now known as the Marina.

many thanks to Eric for your reply. interestingly I even thought the name of the theater I was looking might have been the Cinema or Century 21. I had no idea of the name change. this site apparently lists theaters by their current names and not the name they were known by for the majority of their existence.

I saw Dangerous Liaisons here in 1988! Wonderful memories. UA did a better job in upkeep than the Col Alex or Coronet! Spacious yet comfortable. Employees swore it was like a second home. I MISS YOU METROPOLITAN!