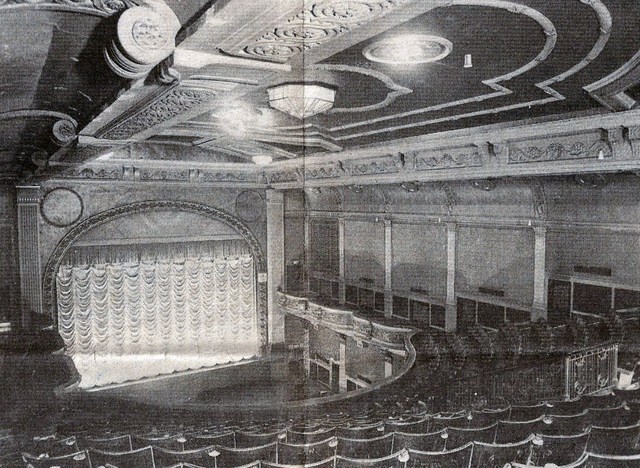 The Picture House in Lower Bridge Street, Walsall opened in July 1920 with a showing of "Woman" starring Florence Billings. It was a project of the Associated Provincial Picture House chain, and was designed by London based architects Robert Atkinson and George Alexander, who had designed their Queens Picture House in Wolverhampton. On the 1st September 1923 the Picture House was destroyed by a fire.

The Picture House had the very first Wurlitzer cinema organ to be installed in the United Kingdom. The 2Manual/6Ranks instrument was shipped over onboard the Cunard Line ‘Mauretania’ and opened on 26th January 1925 by organist Jack Courtnay. The exterior of the building was faced in white tiles manufactured by the Hathern Station Brick & Terra Cotta Company. The foyer was decorated in a Tudor style, with a carved timber real coal burning fireplace. Inside the auditorium there were slips on each side of the balcony, leading to exits. The cinema had a very popular café/restaurant, which remained open throughout its life.

In February 1929 PCT were taken over by Gaumont, but the Picture House wasn’t renamed Gaumont until 1948. When CinemaScope was installed in 1955, the Wurlitzer organ was removed from the building and was taken to the Congregational Church in the small fishing village of Beer, on the south coast of Devon. It was undergoing restoration in 2011.

Gaumont British Theatres became part of the Rank Organisation and the Gaumont was re-named Odeon from 22nd October 1965. The auditorium and foyers were ‘modernised’ in 1967, destroying the charming ambience of the cinema and it re-opened 26th June 1967. On 2nd March 1971, it was again destroyed by fire, this time in an arson attack. The remains of the frontage was boarded up, which was how it remained for several years before being sold and re-developed.

A Tesco Metro supermarket was built on the site. This had closed by February 2013. In 2016 it was a Co-Op Supermarket.

The Tesco Supermarket is closed.. and awaiting the Co-operative Supermarket and Primark to move on to the site

The Co-operative Supermarket is now open.

See auditorium photo of Gaumont/Havelock Sunderland and note the similarities. Percy Lindsey B rowne & Glover I assume were the forerunners of Percy L Browne & Son who were assigned by ABC to design most of their theatres in the Tyne Tees Region (WR Glen was obviously too busy).

Terry Ken Roe and I are doing research on this problem funny enough I believe the Sunderland Theatre was done By George Alexander. When ABC Built Cinemas they employed a more local Architect to supervise stages of construction as it is required by Law.. Which probably why the name has appeared.. Glen’s assistant C. Jack Foster was the Ex PCT Architect by the way So that is how the connection was made.. Take a Look at the Queens Cinema Wolverhampton you see the design repeated again..

Well, I did not know that CJ Foster came from PCT but this has made me wonder about a story my old friend and sparring partner, George Skelton (now in that Licensed Variety Theatre in the Sky) told me years ago.

Georges’s second theatre as a young Manager was Doncaster Picture House (this was after Hippodrome Nuneaton and prior to Regal Rochdale) and, aware of the building’s limitations by this time (early CinemaScope days), ABC were approached by the owners of the town’s largest cinema, the Ritz who were proposing to sell.

ABC sent CJ Foster to survey the place and he said that there was a huge crack down a side elevation and therefore did not recommend purchase. George said that his instinct would have been to “cement the bloody crack up” but the decision was made and, of course, who ended up with the Ritz?…..Rank and it became the Odeon whilst ABC soldiered on with the PictureHouse for years afterwards before finally opening the new ABC in 1967.

Terry. The Hippodrome Nuneaton was ABC’s first Theatre in the Town. Which was in Partners ship with Leon Salberg and Sidney Clift… The Ritz was owned and built by Union Cinemas which was part of the take over by ABC… I used to do relief Management at the Ritz when I was a Lad :o)

More photo’s of the Picture House in Walsall, along with a bit more history, can be found at: www.beerwurlitzer.org.uk/walsall-picture-house.html

Visiting the Gaumont (Walsall pron. Gormunt) was a rare treat. The photos confirm it looked like a west end theatre. The foyer was like the sitting room of a stately home and on the first floor was a celebrated restaurant. The interior decor was majestic. I only began using it when I started going out with girls as the ticket prices were so dear. It was the place to see the local premiers of big films like Lawrence of Arabia. I took one girlfriend to see The Sound of Music there, swankily getting the tickets in advance and presenting them to the uniformed staff. Regrettably it was refurbished with a sterile, modern look, but didn’t last long before being destroyed in a fire. I recall one of the last visits there when we sat up in the circle and were disturbed my a mouse munching on a crisp packet under my seat!