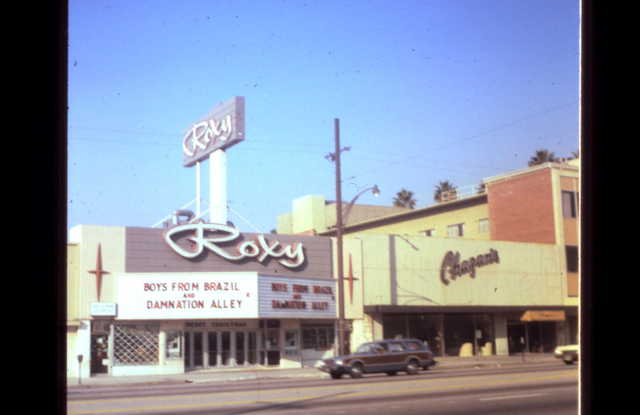 The 800-seat Roxy Cinema was opened between 1936 & 1938. It was one of the most family-oriented theatres in the country.

Sadly after almost 60 years the Roxy Theatre was closed on July 31, 1995 with Tim Curry in “Congo” & Mel Gibson in “Braveheart”. In 1996 it became a live-stage entertainment which was known as the Beyond the Star’s Palace. It closed in 2015 and the building has become a banquet hall known as Stars on Brand.

Wow Thanks for putting up the picture I worked at the ROXY from 83 – 88 In 83 it was called SRO ROXY (Sterling Recreation Organization) then in Pacific Theatre took over Last time I seen it was a heart break It had been changed over to this star place I got to see all the changes,but I impressed the manager when as we were walking through I could discribe all the old stuff that was in it He knew then that I had indeed worked there Lots of fond memories in the old Roxy The picture brings them all back even if it was before I started working there I miss her She was like a second home to me I still got our troupy we won as SRO I was the last SRO employee there The whole place changed when Pacific took over Most left because it wasn’t the fun place to work like it had been under SRO Again “Thanks” for putting up this picture We had one manager “Ray Wright” who had lots of inside & outside pictures of the Roxy during the mid-80’s,but I think he died in the 90’s & all those pictures are all gone I might have a few,but nothing like he had

The name on the theater’s marquee is “Beyond the Stars Palace.” Googling that full name you can find the theater’s official web site.

The Los Angeles County assessor’s office gives the construction date of the building on this parcel as 1938.

BillCounter: If you still have access to any old Glendale city directories, could you look up two theaters that appear to be missing from the Cinema Treasures database? There was a Lincoln Theatre, mentioned in Exhibitor’s Herald & Moving Picture World of June 2, 1928, and the Majestic Theatre, which was to be opened on February 3, 1912, according to the January 21, 1912, issue of the Glendale News. The Majestic was located on 4th Street (since renamed Broadway) east of Brand.

I live in Sacramento so I’m limited to what resources the State Library has. Which in city directories for Glendale means only back to 1930 — and nothing in that one for the Lincoln.

I did find a hit in the 1928 Los Angeles phone book (which has an alphabetical Glendale section at the rear). Lincoln is listed as at 129 N. Brand. I’m going to be reckless and say it’s a last fling AKA for the Palace Grand (usually listed as 131 N. Brand). Nothing in the 29 phone book for it.

State Library is missing the 1912 and 1913 LA phonebooks. Couldn’t find the Majestic in 1914. But perhaps either the theatre had vanished or listing was under the owner’s name. These LA phonebooks have a classified for LA but not for the Glendale or other out of town exchanges.

I sent an e-mail to Glendale research wizard George Ellison at the Glendale Library. He’s the one who came up with addresses for me for the 1910 Glendale Theatre.

See my Glendale Theatres page for info on that one — also not on CT yet I believe. I’ll let you know any news. Best Wishes!

The Majestic Theatre —
Here’s the word from George Ellison at the Glendale Public Library:

“The Majestic Theatre only appears in two Glendale City Directories. They are 1913-1914 and 1915-1916. The address was 1105 West Broadway. The 1917 Directory has two other businesses at that address. They did not move to another Glendale address. After the 1918 renumbering it became 115 East Broadway.”

Thanks for the information on the Majestic, Bill. A card in the L.A. Library’s California Index says that the Majestic was designed by architect Paul V. Tuttle. (He also designed Glendale’s Carnegie Library, opened in 1914 and demolished in 1977.)

The L.A. County Assessor’s office lists a big lot at the northwest corner of Broadway and Maryland with three buildings on it, one of which was built in 1912, with an effective construction date of 1970. The other two date from 1921 and 1990, but all three have been remodeled to have a unified facade style. The 1912/1970 structure has 13,110 square feet. The Majestic’s building was 70x94 feet, according to the California Index entry, which would give it about 6,580 feet on each floor, or a bit over 13,000 square feet. The current address 115 E. Broadway is in that building, which, judging from Google’s satellite view, has a frontage of about 94 feet on Broadway and is about 70 feet deep. I’m pretty sure this is the Majestic’s building, still standing, but altered beyond recognition.

I think you must be right about the name Lincoln being an AKA for the Palace Grand. I’ll leave a comment on Cinema Treasures' Palace Grand page, noting this new AKA.

Great work on the Majestic, Joe! You’ve found another one!

“The Rocketeer” was presented here (when it was Pacific’s Roxy) in 35mm Dolby Stereo beginning on Friday June 21, 1991.

Beyond the Stars Palace shut down in 2015.

It is now a banquet hall called Stars on Brand.

After my research on newspapers.com, Roxy Theatre (known as Pacific’s Roxy) was closed on Monday, July 31, 1995. Last films as clipped from Sunday, July 30th were a double feature, “Congo” and “Braveheart”.