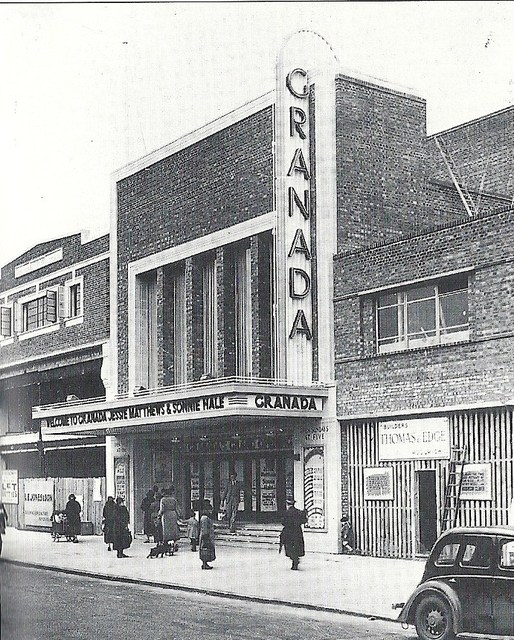 Located in Welling, a district to the south-east of Greater London. The Granada Theatre was opened on 2nd February 1938 with Edward G. Robinson in "Kid Galahad" and Jean Arthur in "Easy Living". The official opening was attended by film stars Jessie Matthews and her husband Sonnie Hale.

The facade was in brick, with five large vertical windows in the centre, allowing light into the foyer, and a vertical fin sign with the name ‘Granada’. There were shop units adjacent on each side of the entrance. Internal decorations were by Theodore Komisarjevsky, and were based on his so called ‘standard’ Granada style, but with a few subtle changes. The Granada was equipped with a fine Wurlitzer 3Manual/8Ranks organ with a grand piano attached, which was opened by organist Robinson Cleaver.

The Granada was tripled in May 1975, with 598 seats in the former circle Screen 1, and two screens in the former rear stalls which seated 229 and 230. The re-opening films on 5th May 1975 were "Breakout" and "Lords of the Flatbush" in Screen 1, "Bazing Saddles" in Screen 2, and "Start the Revolution Without Me" in Screen 3. Popular organ concerts were still held in the Granada on Sunday mornings into the late-1970’s, but these were halted when a resident living neaby complained about the ‘noise’ of the organ.

The Granada was closed on 30th July 1983, with "Return of the Jedi", "Superman II" and "Sweet Body of Bianca". The Wurlitzer organ was removed and is now installed in the Woking Leisure Centre.

The building was sold for redevelopment, and was demolished in October 1986. Shops with housing above have been built on the site. One of the original shop units to the left of the cinema entrance was retained, and in 2009 contains Celal’s Gentleman’s Barber, with the Welling Snooker & Pool hall upstairs.

A set of vintage photographs of the Granada Welling;
View link

What a lovely cinema this was, Great childhood memories of this place.Stood derelict for a number of years and vandals got in and smashed the place up. Remember sneeking in for a look when derelict it very sad to see the place in such a bad way.