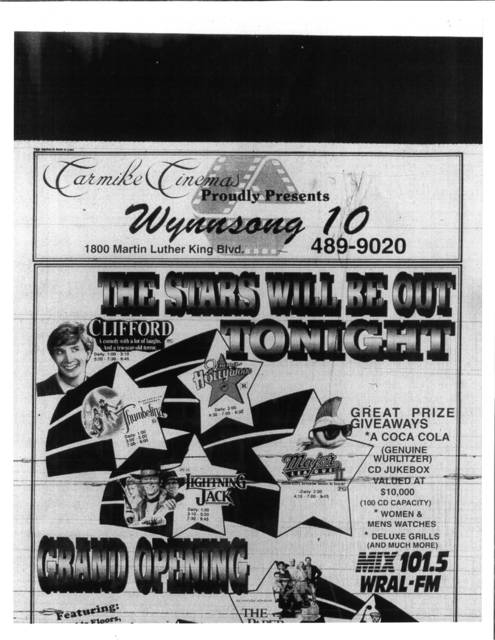 The opening of the Wynnsong Cinemas in Southwestern Durham spelled doom for both the Yorktowne, the Center, and the South Square Mall Cinemas. By February of 1992 or 1994, the South Square Mall Cinemas officially closed its doors forever, leaving the Yorktowne, the Center to be the only operating theatres in that section of Durham. That was about to change.

In 1993, the Yorktowne became a discount theatre, leaving the Center, the Willowdaile, the Carmike 7, and the Ram Triple as the only five operating movie houses in Durham that were owned and operated by Carmike Cinemas(basically Carmike had control of all the operating moviehouses in both Durham and Chapel Hill).

The Wynnsong Cinemas was Durham’s first-ever megaplex theatre, and was officially the theatre that replaced the now closed South Square Mall Cinemas. At the time of the Wynnsong’s opening, the Willowdaile, the Carmike 7, the Center, were the only multiplex theatres in town while the Ram Triple(located in Chapel Hill) was the only triplex cinema in operation. At the time of its opening, the Yorktowne and the Center became discount movie houses while the Wynnsong took over operations for first-run features and other films of interest.

The Wynnsong’s location was not far from the South Square Mall area since it was located in Southwestern Durham at 1800 Martin Luther King Junior Parkway at the intersection of Shannon Road at University Commons Shopping Center. It can be accessible from either University Drive or by taking either the U.S. 15-501 Bypass Exit towards the MLK Pkwy. and you can also access it from nearby Durham-Chapel Hill Boulevard.

The grand opening of the Wynnsong Cinemas was on April 1, 1994 to great fanfare. The grand opening opening was hosted by radio personalities from WRAL-FM 101.5 and other local personalities. It was Durham’s first 10-screen megaplex cinema. The inside lobby and concession stands were incredibly huge: There were two concession stands on either side. The interior featured marble stained floors, mirrored walls from either direction;high pillow back seats for maximum comfort with the two larger auditoriums that were equipped with the latest THX-Dolby Stereo, super widescreen projection that was capable of showing films in both 35mm and 70mm. The theatre had acres of free parking(either at the front entrance or around the side), with matinees daily and late shows on Friday and Saturday evenings.

The opening attractions for the April 1, 1994 showing at the Wynnsong 10 were "Jimmy Hollywood", "Lightning Jack", "Clifford", "Naked Gun III", "The Paper", "Sugar Hill", "Above The Rim", "Major League 2", "D2:The Mighty Ducks", along with a double feature showing of "Batman:Mask of the Phantasm". The Wynnsong Cinemas was the place in all of Durham to see a great movie and it was a vast improvement from the South Square Mall Cinemas(which was the worst theatre in Durham),and both the Center and the Yorktowne(which were at the age of the dinosaur moviehouses that were built in the mid-to-late-1960’s).

On December 18, 1998 it was expanded to 15-screens making it bigger and better than ever and to upgrade to new features offer full stadium seating in all auditoriums with full digital sound and projection(the first in Durham), making it the Wynnsong 15. It is still the only movie theatre in all of Durham to offer late shows on Friday and Saturday evenings and was the only Carmike theatre in operation within the Durham-Chapel Hill area. It is now operated by AMC.

Seating capacity should be 2,400

This theater’s days be numbered since GATES construction has started building a 67,000 square foot movie theater at Chapel Hill’s University Mall that will be a seating capacity of 1,500 and 13-screens on the site of the former Dillard’s Department Store that will put this cinema(which opened in 1994)in competition once its opens being it is the ONLY Carmike Cinema venue between Durham and Chapel Hill.

A fun fact about the wynnsong opening. They had 5 cent popcorn and drinks and 10 cent candy as a promotion for their grand opening . I worked there for 2 years in high school in the 90s. Great blog about theaters love this.

A fact about this theatre. Carmike Cinemas was bought out by American Multi-Cinemas(AMC Theatres)and who knows when the new changed will take place since this theatre’s days are numbered with the opening of the Silverspot Cinemas at Chapel Hill’s University Mall that opened in October 2015.

The Wynnsong Cinemas is the only Carmike venue between Durham and Chapel Hill. Carmike also has three other cinemas in Raleigh(Blue Ridge 10 & Carmike 15),and in Morrisville(Park Place 16) that may be affected.

As someone who worked at Carmike Wynnsong, AMC’s buyout is a good thing. They do regular maintenance and don’t stint on the upgrades. But compared to Carmike’s former competitor at Southpoint, Silverspot is a different experience overall.

It is now officially rebranded as AMC Classic Durham 15.