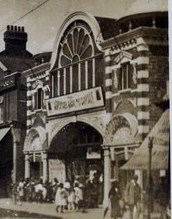 The Picture Palladium was opened in 1913. It was equipped with an organ (possibly a Hope-Jones straight organ). The cinema was closed in 1915, possibly due to conditions during World War I, or by being requisitioned by the government?

The Picture Palladium was re-opened around 1920. The organ was most likely removed when the cinema was fitted with an RCA sound system in 1929. Later a Western Electric sound sytstem was fitted and it was closed as the Palladium Cinema at the end of 1937.

A branch of Marks & Spencer stores was built on the site, which still operates in 2012.