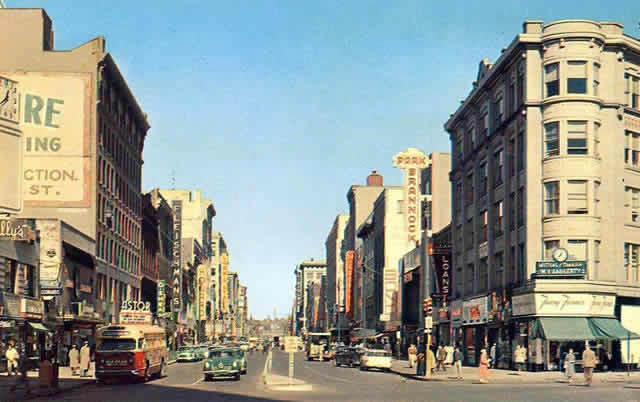 The Empire Theater was opened in the 1911, with seating provided in orchestra and two balcony levels. It was designed by the architecural firm Tabor & Baxter. It continued to operate under the Empire name until the early-1930’s, when it was renamed DeWitt Theater. By 1940, it had reverted back to the Empire Theater name and was under the management of RKO. It was given a Streamline-Moderne style makeover, to the plans of architect Michael J. DeAngelis.

Today, the original building still stands on S. Salina Street, known as Empire House, in use as offices. The auditorium at the rear has been demolished.

And of course I must add that this was part of the Schine Chain, at one time!
: )

Pardon me but I did no such thing. My original comment concerned that fact that three individuals took credit for a posting which only had a theatre name, the city and the state. Then, within days there was a link to a postcard image of the theatre. My presumption being that the postcard was the original triggering event in which case at least the street name, if not the actual address could have been established from square one since there was another theatre image on the postcard and that theatre was already on CT. The rest, as we see is being gradually fleshed out. But this discussion on my original comment seems to never end. I deliberately avoided responding to Joe’s recent comment hoping we’d get on with the business of updating the site and not resorting to personalities.
Billy apologized to me, above, for a comment he had made, I believe you also owe me one.

Your words are still up there for all to read rvb. You insinuated that I submitted a contrived theater posting. Unfortunately for you I make posting submissions in accordance with Cinema Treasure’s guidelines and not your personal preferences. If you have a problem with that why don’t you take it up with them or shut up. Personally I like the shut up option best.

Then please excercise it. This has been going on since June.

The July 16, 1910, issue of The American Contractor said that construction contracts had been let for a 7-storey office building and theater on South Salina Street in Syracuse. This had to have been the Empire Theatre.

The item said that the architects and engineers for the project were Taber & Baxter. I’ve found references to architect Wellington W. Taber, but haven’t found Mr. Baxter’s full name, or discovered if he was also an architect or was the engineer with the firm.

Wellington W. Taber and George W. Baxter were active architects in Syracuse at the turn of the 20th century. I’m presently compiling a list of their bldgs. Here is a useful obit for Baxter, who is the lesser known of the two.

Syracuse Journal (Syracuse, NY), 13 June 1917. “The funeral of George Washington Baxter, 66, a member of the architectural and engineering firm of Taber & Baxter, who died suddenly Tuesday night at his home, 104 McLennan av., will be held from there Friday afternoon at 2 o'clock with Masonic services at the grave in Oakwood Cemetery.

He was in his usual health last evening when he returned home from his office, where he had been all day. He was entering his bedroom about 9 o'clock when he was stricken. Dr. Allen Cone was summoned, but Mr. Baxter was beyond aid at the arrival of the physician. Mr. Baxter was born in Brooklyn in 1851, and came to this city when he was 20 years of age, going into the salt business. Several years later he was engaged in architecture and opened an office under the name of Baxter & Buell.

After Mr. Buell’s death he entered the employ of the Solvay Process Company, where he worked for several years. Then he entered into partnership with Wellington W. Taber. He was a member of Central City Lodge, No. 305, F. and A. M., and the Citizens Club. Surviving are his widow, Mrs. Eva Beecher Baxter; a son. Robert A. Baxter; one daughter, Mrs. James L. Crabtree; four grandchildren, Donald B. Baxter, William B. Crabtree, Eva Crabtree and John P. Baxter; three brothers and a sister."

After reading about this theatre on the above boxofficemagazine link I have come to realize that De Angelis was truly ahead of his time! As was another famous and well known architect….Frank Lloyd Wright.

Does anybody know anything about the Crescent Theatre on South Salina Street? I have an old postcard of this street showing the Empire Theatre and directly across the street is the Crescent. This card is not dated, but it is very early (c.1920?). The Empire is shown with a horizontal sign, over a canopy which extends to the edge of the sidewalk. Another 1950’s card shows the Empire, but it appears the Crescent building has been replaced.

My notes say that the Crescent Theatre operated at 451 S. Salina Street from 1909 to 1928. It was built and originally operated by the Cahill brothers. In 1916 it became part of the Keith vaudeville circuit for a while. A Marr & Colton organ was installed in 1920.

A two-page article about the 1940 remodeling of the Empire Theatre appears in the April 27 issue of Showmen’s Trade Review. Here is a scan from the Internet Archive. There are photos from before and after the streamlining designed by architect Michael J. DeAngelis.

As much as I like DeAngelis’s work, I must say that in this case I wish he’d left more of the original detail in place. Tabor & Baxter’s design had some very nice features.