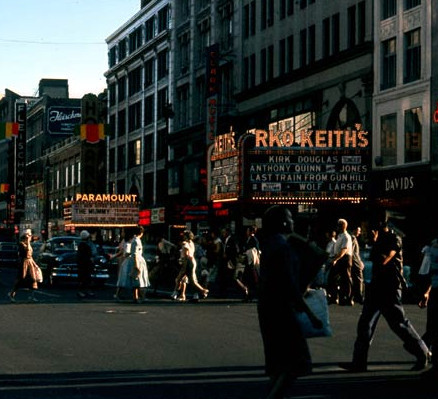 Built in 1919, B.F. Keith’s New Theatre was opened on January 20, 1920. It was billed as “The Most Magnificent Theatre In All The Universe”. A large painted sign on the north side of the building said “B.F. Keith’s New Theatre Devoted To High Class Vaudeville”. In 1925 the Wurlitzer Co. installed a 3 manual 11 rank theatre pipe organ, opus 1143.

Unfortunately, the theatre was torn down in 1967 due to urban renewal. Many of the theatre’s furnishings and equipment still survives as part of the Empire State Theatre and Musical Instrument Museum. The Wurlitzer organ was removed in January 1967, restored and permanently installed in the Empire Theatre on the New York State Fairgrounds in Syracuse, New York.

Contributed by Philip A. Edwards
Get Movie Tickets & Showtimes

It was a tremendous honor to be one of Jim’s pallbearers. He and his wife Irene truly took me under their wing when I was a young, idealistic and enthusiastic theater lover so very long ago. Today I owe a great deal to Jim’s mentoring.

The stories old Jim used to tell when he worked backstage during vaudevilee were priceless.Who knew Moe of the 3 Stooges like to knit?

In response to Ed Solero’s photo and question on the date of the photo, here is the response from ESTMIM who currently owns the organ: “Easy question! The exact date was June 14 ,1966. The Glimpse of the Past program was one of the last times the Wurlitzer was used in the theatre for a public performance. This program was basically a fundraiser to purchase the instrument and move it out of the theatre, which was demolished in 1967. We have in our archives the â€œorder formâ€ paper for the wording on the Marquee.”

Wow… A lot later than I thought. Glad we were able to get that resolved so quickly! Thanks, Schine!

You know… I wonder how well the program sold? How many of the 2548 seats were filled that evening?

The “Glimpse of the Past” program was sold out, literally. The seats were “reserved only”. On display in the museum is a photograph taken that night from stage right looking out into the audience. In the foreground Luella Wickham is performing on the Wurlitzer. We also have an audio recording of that program featuring master of ceremonies Deacon Doubleday, of the Wired Woodshed program AM 57 WSYR radio. Our museum has plans to have the recording digitally remastered and make it available to the public. Most interesting fact is, Carleton James who was the original organist in 1925-? at this theatre accompanied a silent film for the “Glimpse of the Past” program. Because of that, the program really was a “Glimpse….."
ESTMIM President(2011)
www.jrjunction.com/estmim

That theatre must have been so ornate, my heart breaks for its loss.

Ok, I remember the RKO theater{Keith’s]. I think I was 4yrs old, when I won a watch, for a contest they had in the early 50’s. I was scared when I had to go up on stage, so my Grandma took me. I don’t have the watch now, but years later, I had a Dance recital there. It was big to me, being about 7yrs, I wore a blue and yellow ballet outfit, and had to put make-up on for the first time.

I do not believe that Schine ever operated either the Strand or the Palace theatres.

There was a product split evident among the chains in downtown Syracuse in the 50’s and 60’s. Schine (the Paramount and the Eckel) had most of the Universal, most of the Disney, and nearly all of the 20th Fox and about ½ of the UA. RKO (Keiths) had all of the Paramount and all Warner Brothers exclusively. Lowes (the State now Landmark and the Strand) had all of the MGM and ½ of the UA. The product from Columbia got divided up between all three (Schine, RKO and Lowes) but primarily played Schine and Lowes.

Interesting about the product split. The Keith’s also booked most of the AIP releases. The first five Corman/Poe titles, the Beach Party series, Black Sunday, Burn Witch Burn and the sword and sandal pictures all played at the Keith’s

The 1947 United States Supreme Court response to Schine’s request for a re-hearing, provides a thorough summary of the business relationship between RKO and Schine.

Under APPENDIX A pages 160 -177, the court summarizes testimony and evidence from the Federal court hearing:

“In 1935 the five first run theaters in Syracuse were the Eckel, Keith, Paramount, Loew and Strand. The Empire, a downtown 1,500 seat theater, was sometimes a first run house and at various times played all runs and operated under all policies

The Federal court decision, affirmed by the Supreme Court, required the existing pooling arrangement with RKO dissolved, but did not require Schine to sell any theaters in Syracuse.

“In June 1947 the RKO Schine pool in Syracuse was dissolved so that Schine now owns 2 first run theaters outright and competes with RKO and Loew’s. This dissolution was approved by Judge Knight” (footnote pg 29 of Schine’s request for a re-hearing)

2) Since profitability depends on booking choices, RKO would seem to be the partner making the important decisions under the SKE pooling agreement. This would explain RKO’s larger share of the profits, initially 60% and later 70%

3) RKO booked and bought pictures for SKE, yet contracts with the major distributors for Syracuse first run, clearances and pricing were with Schine. This might indicate that Schine was a front for RKO, who actually booked the theaters and took the larger share of the profits.

4) Outside of the pooling agreement with RKO, Schine held short term leases (2-3 years) on the James and Palace theaters in the mid 1940’s

To avoid a lot of confusion, I’ve removed my earlier comments on RKO and the Schine circuit