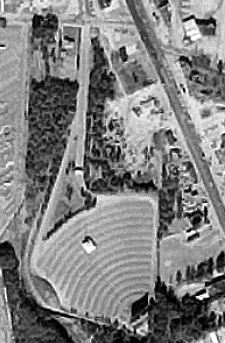 The Marietta Drive-In parked 425 cars making it the city’s largest drive-in. In 1956 it was owned by R.E. Martin Circuit, in other words, a Martin Theatre.

“The Georgia Drive-in was operational less than a mile down the road, past I-75 at Hwy 41, diagonally across the road from legendary The Big Chicken.”

Not quite. The Georgia Drive-In was further south on Hwy.41 (then called The Four Lane)at the next intersection, which was at Clay Street(now called the 120 South Loop).

The former entrance to the drive-in is now occupied by a small Greyhound bus station.

Ooo, you beat me to it, Sharples. I was actually scouting the Georgia and Martin Drive-in locations yesterday afternoon, when I recognized the error. I had intended to post a correction to my fuzzy sense of directions here. Apologies to The Big Chicken.

I worked for WFOM Radio in Marietta for two periods between 1974 and 1980. I wrote and announced the commercials for the Martin Drive-ins in the area, 75 spots each weekend. The Georgia, Smyrna, and Marbro Twin were all operational in early 1980 when I left the station. I remained in the area, but don’t recall these theatres' specific closings. We did see STAR TREK II: THE WRATH OF KHAN at the Marbro in June, 1982, our last visit to any of the locations.

I don’t remember when any of the Cobb County drive-ins closed either, but I do remember that the last movie I saw at a drive-in was “The French Connection” at the Georgia Drive-In in 1972. I took my girlfriend there in my 1958 Edsel!

If she wasn’t impressed, she should have been.

I hope you got to take the Edsel to see THE GHOST AND MR. CHICKEN.

I spent many of my teen age years at the drive inns. Both at the Martin and the Georgia. That would be in the mid to late 60’s. The Martin was the nicer one. They showed the newer movies. Really miss those cool nights ..

I worked at the Martin Drive-in from 1954 thru 1957. Jerome Zimmerman was manager. He was the younger brother of James Zimmerman, who managed the Strand in Marietta. It was located on the north side of Roswell Road, directly across from East Marietta shopping center.

The Martin Drive-in opened about 1948 give or take a couple of years. Varner’s Grill was also on the north side of Roswell road, maybe an eighth of a mile west of the drive-in.

Gee. I see by the aerial photo that the screen was not on the highway, but at the bottom of the hill. Interesting and good to know for certain. Also, notice the pre-CinemaScope screen. It’s 4:3 shape, which was so 1948.