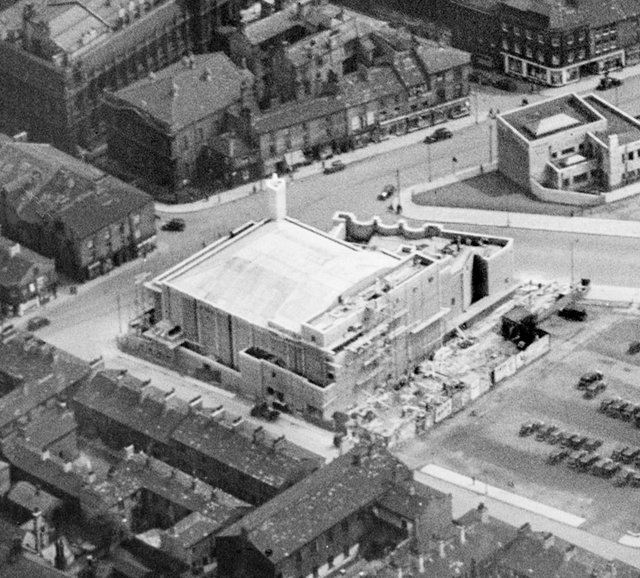 The Halifax Odeon opened on 27th June 1938 with Errol Flynn in “The Perfect Speciman”. It is bounded by Orange Street, Broad Street, and Great Albion Street. The architect was George Coles and it cost £59,727 to build. It had 1,344 stalls seats and 714 in the balcony giving a total of 2,058. A most unusual façade remains intact with three concave bays covered with buff faience tiles, above the entrance each containing a convex window. A tall Art Deco style tower formerly had the Odeon lettering illuminated by neon. It was however not originally intended for the Odeon circuit, but was a take over during construction, which explains its differences from the typical ‘Odeon’ style.

The cinema had a wide proscenium and a stylish interior with decoration dominated by two large bas-relief female figures on the splay walls either side of the screen (now removed). Lighting was entirely indirect.

The Odeon Cinema closed on 18th October 1975 with Robin Askwith in “Confessions of a Pop Performer”. It stood unused for a while. It was later converted into a Top Rank Bingo Club which is still operating as a Mecca Bingo Club today.

George lived to be in his mid nineties and Beryl her late eighties. George’s arrival at York was fortuitous, 1964 saw Rank spend £20,000 on modernising and refurbishing the Odeon and he soon became one of the best known characters in the City. His welcoming personality and skill in coordinating publicity campaigns meant the already very successful cinema went from strength to strength and his Profit Plan almost always had a healthy figure on the bottom line! A late colleague and great friend of mine, Steve Gaunt, trained at Merrion Centre with Charles Close and a very friendly secretary/local assistant manageress – the name May rings a bell. I was part of the same “intake” as Steve in early 1966, but at York, of course, and the two of us liked nothing better than to spend our nights off watching 70mm. films at M. Centre and the Majestic and, very occasionally, the opposition in Vicar Lane! A very happy period on the eve of sub-divisions when “our” cinemas were still very impressive.

The Manager to follow Geoffrey May would be Peter Talbot who was my opposite number in Newcastle. Relations between Rank and ABC in that city were, I am pleased to say, as cordial as was the case in Halifax. I originally met Peter at Odeon Halifax when, in his capacity as a former Manager and (at that time)Operations Manager, based at Odeon Headrow Leeds, he attended the farewell party at the Odeon upon its closure in 1975.

Chief Projectionist at York for many years was Donald Denham, one of life’s more difficult “characters”. He had been an apprentice when the Odeon opened and retired some time after 1966. We had an usherette, Lily Snowden, formerly Chief at the long-closed Regent in Acomb (a York suburb)and her son, Tony, was a projectionist at York before transferring to Leeds Majestic where he showed me around the ‘box and explained how they turned the sound up a couple of notches as the cathedral organ appeared in the long-running “The Sound of Music”! I’m wondering if Tony would have had a different name to his Mum in which case the timing would make Tony Cutt the one and the same guy. Yes, a reunion of us “survivors” would indeed be great. If you are ever within striking distance of York, you’d be most welcome at my home cinema – it is, officially, an Odeon – the only one in York – and has all the trappings of a traditional one as well as digital projection including 3D. I think there would be much to talk about and perhaps the chance to think about organising a reunion. My email address is: .uk James

If my memory serves me right, the assistant manageress at Odeon Merrion Centre was Margaret Smith and her daughter Carol was the secretary, that was in 1964 the year of it’s opening. Cyril Charles Close was later moved to the Odeon (ex Gaumont ) Bradford where I am told he sadly died.

I believe John Ramsden followed Donald Denham as Chief at Odeon York, on promotion from 2nd at Odeon Merrion Centre. Tony Cutts after the Odeon M/C opened became Chief at the Majestic during its epic run with The Sound of Music. He lived at that time in Holmwood Bradford and travelled daily to Leeds. He also had the most comprehensive collection of LP’s a real collector. Later and towards the end of his life he was the Chief at the Picture House in Bradford which is attached to the Museum of film and television and the Imax cinema in Bradford.

Everything comes together – Tony must have been the one and the same and presumably his mother remarried at some point and thus changed her name. On reflection, when Lily introduced me to Tony at Odeon York, I think he’d probably just called in to see her rather than actually being based there. Knowing the three of us were all very interested in the cinemas themselves led to Tony inviting me to the Majestic and this was during 1966 which all makes sense. I know Mr Close loved his Odeon M.C. and I’m assuming he would have “opened” the new Bradford twin Odeons. I “helped out” with the charity premiere of “Chitty Chitty Bang Bang” when Odeon M.C. was one of several key Rank theatres which shared the event with Odeon, Leicester Square. There was C.C.T.V. footage on the screen of the Queen and Duke of Edinburgh meeting the special guests at the West End Premiere and our guests were local dignitaries. Mr Close had a large photograph of his Odeon’s auditorium, as it looked originally before the “Cinerama” changes, on his desk and he proudly showed it to me saying “This is the best little cinema in the country”. Donald Denham was a strange guy, uncooperative and awkward (guess he didn’t care for youngsters who would become senior to him in rank). I had known and loved Odeon, York since being taken there as a child and in a rare conversation with Mr Denham, I happened to describe in minute detail the original screen tabs which were removed in ‘53 when the CinemaScope screen frame was installed. He appeared incredulous that an 18 year old could remember them let alone describe them and his eyes filled with tears as he told me the contractors putting in the new screen frame had put the magnificent curtains in a skip in the car park as they would have fouled the deeper frame. After that, he was like my best friend and would bring in old photo’s for me to see and ask me to pop into the box if there was anything interesting or unusual to see. He would, I think, have retired just a few years after I transferred to Odeon, Harrogate in '67.

The career story of Tony Cutts can be found on the following site. bradfordodeonrescuegroup.co.uk

This is the cinema where my cinema career really started as an apprentice projectionist in August 1960. I really loved my time here under Chief Jimmy Thompson and 2nd Tommy Allen who became my adopted father.Loved every minute of it. George Shepheard was the Manager who persuaded me to go into cinema management and I was sent to the Odeon Merrion centre for training.

The projectors when I started were BTH Supa’s. To me the bees knees but after about two years were changed to Kalee 21 s. The parkeet floor of the projection room was so highly polished like a mirror. Last year I revisited the now bingo club and the manager kindly showed me around the many changes that have taken place over 50 years. The old projection suite now looking very rejected and unloved and the highly polished floor WELL! Nice to revisit but also upsetting too. But old memories will prevail.