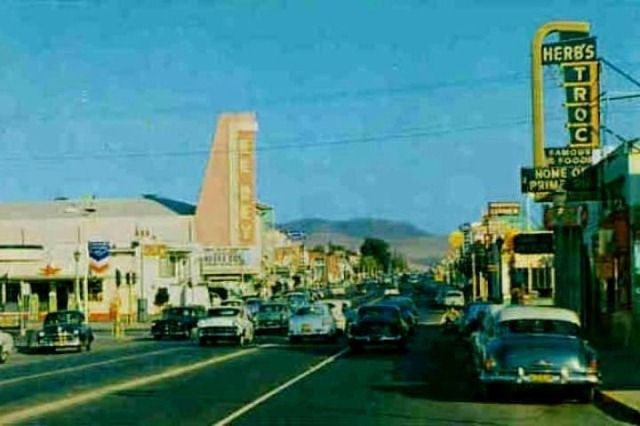 The El Rey Theatre was opened in 1949. It was located on Tennessee Street at Broadway Street In the early-1970’s it was converted into a 3-screen theatre. It was closed in 1989.

The El Rey was opened by Ray Syufy. CinemaTour has five photos, two from 1967 when it was operating as the Cine 21, and three later shots with the name Cine 3 on the vertical sign. It was apparently triplexed at some time before finally being converted into a church.

Do you know if that theater had a balcony?

I don’t think there was a balcony, but there might have been a section of stadium seating. Vincent Raney designed many houses with stadium sections during that period.

Stadium seating is what I meant – the Orinda Theater has it, the Stamm had it as well as the Denver, the Enean in Concord and plenty of others.

Just by looking at the structer, it seems that there was stadium seating.

Theatre did have a balcony, until they made it a tri-plex in the early 70’s,reducing the Theater A as it was called capacity to 575 seats. Balcony was split to add 2 additional screens Theaters B & C. No stadium seating.

The El Rey, was Suyfy’s 4th theatre in Vallejo. I recall seeing my first movie at this theatre the “Sound of Music” back in the late 60s, you couldn’t sit up in the balcony seats unless you were 18 years or older. Then when the named changed to Cine 21,(must have changed around 1968 or so) I remember seeing “Enter the Dragon around 1973 and “Star Wars” in 1977. They ended up closing off the balcony seating area in the early 70s. The last film I saw as Cine 3 and triplex conversion was “Beverly Hills Cop”, I remember seeing that movie twice back in the 80s, but I’m thinking they already converted the theatre into a duplex back in 1977 because I vaguely remember seeing the film “You Light up my Life” not in the main large screen but a screen in another room, to the right once you walked into the place. I miss this nostalgic movie theatre, where I grew up watching most of the films as a kid and teenager.

I don’t remember it ever being called Cine 21, I remember Century 21 and was a large single screen with a balcony, then around 1980 the balcony was used to create the two additional, small sceens and changed the name to Cine 3 (which sounded odd at the time). I’m sure that this was Syufy first theater that used the “Century” name. Saw Disney’s Jungle Book there as a kid on the big screen in the late 60’s and many other movies before the balcony was converted, I remember seeing Hot Dog… The Movie, on the right hand small screen in 1984 but nothing after that. I wish Syufy would reopen this huge single screen theater and restore it to its formor glory. The area desperately needs help, and restoring all the neon that this building used to have would be a god send to the business' in this neighborhood, I remember it well, it was a beautiful theater. Too bad Syufy abandoned it. I wonder if the family still owns it? Since it was Syufy’s first “Century” theater, they should use some of their fortune and take some pride in their beginnings, and restore and maintain this once great theater.

I have seen an old Vallejo newspaper movie listing from 1974 and it showed the Cine 21? having 3 screens, listed as Cine 21a, Cine 21b, and Cine 21c. I still believe that this theater used the Century name before it went to the Cine name. My guess is that it changed when it went to 3 screens.

Here is the history background from wiki, The Century Theater chain was originally named Syufy Enterprises, for its founder Raymond Syufy (senior), who built his first theater in Vallejo, CA in 1941. The first Century theater was the Century 21 in San Jose, California, which opened in 1963, adjacent to the Winchester Mystery House.

We really can’t say why Ray Syufy put the sign Cine 21 on the Tennessee St. theatre but my guess is since the Century 21 business name existed since 1941 and the El Rey opened in 1949, the Cine name was probably short for Cinema and 21 was for the ending part of Century 21. He probably didn’t want to put up a larger Marquee neon sign called Century.(?), we wouldn’t really know unless we ask the Syufy family.

My sincere wish is that the Syufy family would like to preserve their oldest theater still standing. It would be fantastic to revive the old theater and put it back into operation and show movies again. I would support it 100% and make it a point to go watch movies there again. Great movies should be seen on really big screens and this theater had a very large screen. Sad that is sits in its present condition. The Syufys should take more pride in their history. It would be a small expense for them to put it back into operation and I’ll bet the City of Vallejo would be grateful and actually help them with the refurbishment.