Sam's Place One and Two

Movie buff that was actually at the SamEric.

Return of the Jedi premiered here 35 years ago tomorrow.

At Facebook, Vintage Philadelphia, Don Mason posted this- The Aldine Theater became Cinema 19. When the Woodstock film opened in 1970, I recall standing in the long line to see the film. A great cinematic experience back then. Groundbreaking use of the split screen. It won the Academy Award for Best Documentary

Robert Ford also commented as below about the manager here & his own jobs- Harry Roegner was the manager of Sam’s Place. He worked all day until finally getting relief from assistant mgrs from around the Eric chain. I was well versed in all positions. Usher, doorman, concessions, box office, name it. The next move was to the big one!! The SAMERIC Theatre!

Robert Ford who later worked as an Assistant Manager at the Sameric (Boyd) posted the following at Friends of the Boyd Facebook page, after posting he had been hired for Eric’s Place & transferred to Eric Mark One-

In 1980 a new Eric theatre was constructed at the site of the old Aldine(?) theatre. Sam’s Place at the southeast corner of 19th and Chestnut street. A meeting was called for the staff of all of the Eric theaters. The “best” , lol, of these were picked and informed of a mandatory transfer to Sam’s Place. As an usher, now at the great new theatre, the standard green waist usher jacket was tossed aside for a brown sports coat. The black bow tie changed to a brown long tie. This was something really special here! Along the Chestnut and 19th street exterior were long, electrically retractable awnings for people in line during bad weather.

Thanks. I’ll add proper credit beneath it. Found it on the Vintage Philadelphia Facebook page, and credited the source there. I always search the comments first, and did not see any link for it.

That 1928 photo is from the City of Philadelphia Archives!

The Pittsburgh Aldine was an old Loew’s theater which later was renamed the Nixon. It was Pittsburgh’s home for stage productions on tour from Broadway as well as a number of roadshow films. “The Sound of Music” played there for over 2 years.

In 1953, Harry Sley, president of the Sley System, a parking lot operator, aquired the Aldine Theatre with plans to convert it into a parking garage. After neighborhood opposition, plans were changed and well known theater architect William Harold Lee, AIA (1884-1974) was hired to remodel the theater. It reopened as the Viking Theatre in 1954. (The Viking closed in 1963 and remained shuttered until 1967 when it reopened as the Cinema 19).

Alan, most of that info is already in my Introduction above but thanks for the 1963 closing date, which will be included above.

I already had an Aldine program from this theater in Philadelphia, so I assumed that my 1925 program was from the same theater. I have corrected the webpage and posted the program on CT under the Pittsburgh Aldine.

I found it: Pittsburgh, and have emailed that site to inform them of the error.

Corrected link, yes, but that site is mistaken. 954 Liberty Ave isn’t the Aldine. Some other Aldine.

No it’s not just you. Here is a corrected link to the March, 1925 theater program for the theater, now called the Loew’s Aldine.

Is it just me or does Bruce’s link not work?

Saw many great mid-70’s movies during the 1 dollar admission days; double bill of West Side Story and The Missouri Breaks; Little Big Man and Hard Times; Chinatown and The Parallax View; Godfather Part II; Towering Inferno; all you had to do was wait a couple of weeks after first run and the same movie would turn up for a dollar at Cinema 19. That was the beginning of it’s downfall, I guess. One time while watching a double bill of Marathon Man and Black Sunday, somebody had a portable tv and was watching a World Series game. It wasn’t even the Phillies.

The Cinema 19 Theatre looks like it closed in early 1979, since the Feb 1980 picture shows the theatre as borded up with the “Sold” sign out in front. That pic was taken shortly before it reopened as “Sam’s Place Twin”. 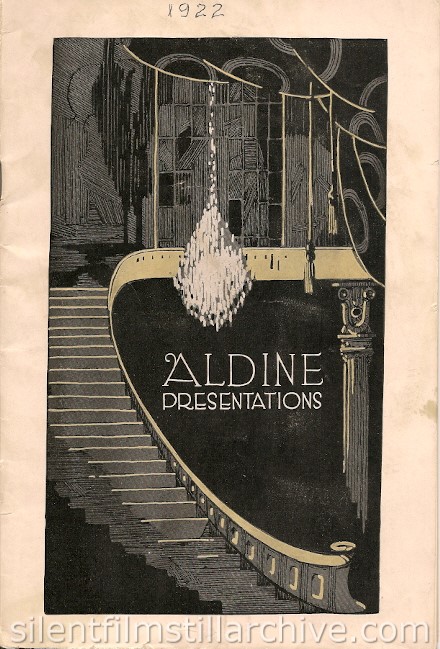 Here’s the cover for a program from Feburary, 1922 at the Aldine Theatre, where they were showing Erich von Stroheim’s Foolish Wives (1922). You can read the entire program at The Silent Film Still Archive.

Saw “The Accused” here (Sam’s Place then) while courting my wife-to-be, and I recall seeing “The Dirty Dozen” either here (Cinema 19) or down a few blocks at The Goldman.