Sam's Place One and Two 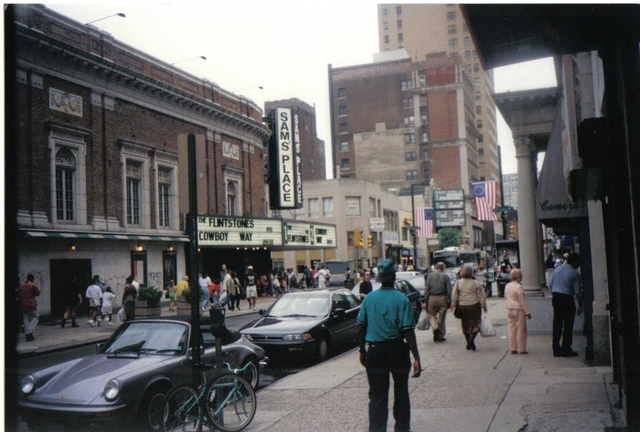 The Georgian Revival style building at the southeast corner of 19th and Chestnut Street now houses a CVS Pharmacy. On November 11, 1921, this was the Aldine Theatre, opened by local theatre operators, brothers Fred D. and M.E. Felt, with 1,500 seats and opened as Philadelphia’s exclusive, first run showcase for United Artists films with Douglas Fairbanks in “The Three Musketeers”. It was named after the Aldine Hotel which was one block to the west. It is partly on the site of the Aldine Hotel that the Boyd Theatre was built in 1928. In 1921, the Felts also built or acquired the Ambassador Theatre on Baltimore Avenue in Philadelphia, the Aldine Theatre in Pittsburgh, and the Aldine Theatre and Parkway Theatre, both in Wilmington, DE.

The style of the interior of the Aldine Theatre was Empire, the second phase of Neo-Classic style. The first phase of Neo-Classic style, Adam, characterized some other movie palaces in downtown Philadelphia. At the Aldine Theatre, two marble grand stairways led from the marble lobby upstairs to the loge seating and restrooms. The auditorium ceiling had a crystal dome through which colored lights filtered. On the orchestra floor, there were raised level box seats which ran the entire length of the auditorium. The mezzanine had four rows of seats. A twenty piece orchestra and a 3 manual, 27 rank Moeller pipe organ accompanied silent movies, and in the talkie era, played between the shows.

With a review of “The Merry Widow” the Exhibitor trade magazine in 1925 stated that “Aldine first nights have become a sort of institution in the theatrical life of the city akin, in their way, to the first nights of important plays and opera.” Silent movies showcased at the movie palace included “The Ten Commandments” (1923), “The Big Parade”(1926), “The Way of all Flesh”(1927), “King of Kings” and “The Phantom of the Opera” starring Lon Chaney(1927), with orchestra accompaniment). Legendry local civil rights lawyer Raymond Pace Alexander successfully sued the Aldine Theatre in 1925 when it refused to seat African-Americans who sought to see “The Ten Commandments”. A decade later, Alexander built his own office building at 1900 Chestnut Street, the Art Moderne corner building across the block, facing the Aldine Theatre. In the 1920’s, the Stanley Co. tookover.

On February 9, 1940 the Aldine Theatre hosted the world premiere of the movie “Vigil in the Night” and in May, 1940, the world premiere of the movie “Turnabout”. In December, 1940, actor Sabu appeared in person for the opening day of the film “The Thief of Bagdad”. Disney’s “Fantasia”(1940) which featured the Philadelphia Orchestra was shown for twelve weeks with the Aldine being the only local theatre equipped with “Fantasound”. “Dumbo” was shown in 1941 and “How Green Was My Valley” was shown for six weeks in early 1942. RKO leased the theatre for four weeks, starting in March 1942, so Philadelphians could see “Citizen Kane”. “Bambi” and “For Whom the Bell Tolls” were on the screen in 1943. Seats at $1,000 each were sold for the December 14, 1944 premiere of “Frenchman’s Creek” in order to raise an estimated $1.2 million in war bonds. More than $4.5 million dollars of ‘E’ bonds were sold at the June 19, 1945 ‘bond premiere’ of “The Valley of Decision” starring Greer Garson. In January, 1950, the Aldine hosted the world premiere of the film noir “Outside the Wall” which was partly filmed in Philadelphia, and the premiere of “Borderline” with the films’s star Claire Trevor and her husband, the movies director, appearing in person. The East Coast premiere of “A Life of Her Own” was held on August 30, 1950. “The River” actress Adrienne Corri appeared in person at the film’s December 1951 opening night. “Cyrano de Bergerac” was on the screen in 1951 with tickets sold out four weeks in advance. Cyrano’s star Jose Ferrer, appeared in person in May 1952 for the showing of “Anything Can Happen”.

In 1953, facing competition from television, the new owners of Stanley Warner sold the Aldine Theatre to a parking garage operator. Town leaders protested the intended new use, so the parking garage operator decided to remodel and reopen the movie theatre. In 1954, the Aldine Theatre closed for considerable interior remodeling supervised by local theatre architect William Harold Lee. Air conditioning was added, as the movie theatre had always closed during summer. Renamed the Viking Theatre, it reopened a few months later on July 1, 1954, a huge 57 foot wide screen for ‘scope films, and reduced seating capacity from 1,296 to 991. Anne Blyth appeared on stage for the gala opening of The Viking Theatres’ first movie, “The Student Prince”. The Viking neon sign, 38 feet tall, had a ship and oars that animated, but the city insisted the animation cease as it was distracting motorists. “Funny Face” was shown in 1957. Disney’s “The Sword and the Stone” was on the big screen in 1963. The Viking Theatre was closed in 1963

It reopened December 12, 1967 with a benefit premiere of Walt Disney’s “The Jungle Book”. Now known as the Cinema 19, with 1,086 seats (of which the loge balcony held 70), refurbished with white ceiling to floor drapes, red carpeting, oyster white seats, and new lighting fixtures imported from Denmark. It was operated by New York City art house movie theatre owner David Rugoff. With Center City moviehouses still showcasing exclusive first runs for the entire Philadelphia region, the local premiere of “The Last Picture Show” (1971) was attended by the director Peter Bogdanovich and star Cybil Sheppard. “The French Connection” opened on October 6, 1971, and “The Poseidon Adventure” opened on December 12, 1972. In 1975, Rugoff & Becker Theatres became Cinema 5 Theatres when they were acquired by Pacific Theatre (then owners of RKO Stanley Warner). The theatre closed in late-1978.

The Sameric Co. acquired the theatre, twinned it and reopened it March 21, 1980 as Sam’s Place One and Two. United Artists acquired it, along with the entire Sameric chain in 1988. First run mainstream releases played to weekend crowds including with many nearby Rittenhouse Square residents. Sam’s Place closed in August 1994 with “Clear and Present Danger” in the big theatre to the left, which had over 800 seats, and “The Little Rascals” in the smaller theatre to the right.

CVS Pharmacy leased the building, converted it into a pharmacy, and added pictures of the Aldine Theatre on the outside of the building.

Thanks. I’ll add proper credit beneath it. Found it on the Vintage Philadelphia Facebook page, and credited the source there. I always search the comments first, and did not see any link for it.

Robert Ford who later worked as an Assistant Manager at the Sameric (Boyd) posted the following at Friends of the Boyd Facebook page, after posting he had been hired for Eric’s Place & transferred to Eric Mark One-

In 1980 a new Eric theatre was constructed at the site of the old Aldine(?) theatre. Sam’s Place at the southeast corner of 19th and Chestnut street. A meeting was called for the staff of all of the Eric theaters. The “best” , lol, of these were picked and informed of a mandatory transfer to Sam’s Place. As an usher, now at the great new theatre, the standard green waist usher jacket was tossed aside for a brown sports coat. The black bow tie changed to a brown long tie. This was something really special here! Along the Chestnut and 19th street exterior were long, electrically retractable awnings for people in line during bad weather.

Robert Ford also commented as below about the manager here & his own jobs- Harry Roegner was the manager of Sam’s Place. He worked all day until finally getting relief from assistant mgrs from around the Eric chain. I was well versed in all positions. Usher, doorman, concessions, box office, name it. The next move was to the big one!! The SAMERIC Theatre!

At Facebook, Vintage Philadelphia, Don Mason posted this- The Aldine Theater became Cinema 19. When the Woodstock film opened in 1970, I recall standing in the long line to see the film. A great cinematic experience back then. Groundbreaking use of the split screen. It won the Academy Award for Best Documentary

Having been in this CVS on a semi-regular basis, I’ve been wondering if the space is just the lobby renovated or the entire theatre complex?

Also, disappointed that the comment from 5/24/18 that was corrected on 5/25/18 is still live on this site. Isn’t there a removal system for that, please?

The comment was removed. The CVS space is that of the lobby and the auditorium.

thank you on both counts.