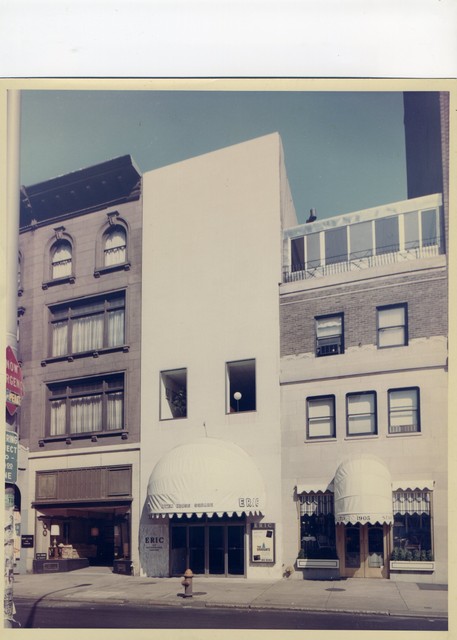 Damaged by fire in 1994, the theatre was demolished and the vacant lot is waiting redevelopment.

Each original Rittenhouse Twin was the width of a typical Center City house. The story was that they could not purchase two contiguous sites, so they were separated with an old house between them. Sometimes you bought a ticket at one twin then walked to the other. Because they were so narrow, there was next to no lobby. Each twin had a small cagelike elevator. When you went in, you were encouraged to take the elevator to the third floor lounge. Then when the previous screening let out, you wouldn’t be in the way. When the theatre was empty, an usher would let you go downstairs.

When they finally acquired the middle site and built a third theatre, everything changed. The original elevators remained, but the new theatre (triplet?) didn’t have one. But the lounge spaces on the second and third floors were connected.

I lived (and worked) only a few blocks from the Rittenhouse cinemas and was probably there 50 times during my 16 years in Philadelphia.

Do you have any photos of either the Rittenhouse or Eric’s Rittenhouse Theatre’s? I’ve Google’d them both but came up empty.

To ctano4: Sorry I don’t have any pics. I lived in Philly only from 1070 to 1986. Looking back, those were pretty good years for movies. I lived in Center City and went 3-4 times a week!

The only memory I have of this theater, and the one and only time I remember going there, was to see a film. It was in the year 1972. I had just turned 18 years of age. The film was rated X and the seating was reserved in which they assigned you a seat. I remember locating my assigned seat to view the film and saw many â€œwell to doâ€ others finding their seats. I even remember a few women with fur coats on! I mean after all it was the Rittenhouse Square Theater!
The film everyone was attending to see (if you havenâ€™t guessed it by now) wasâ€¦
â€œLast Tango In Parisâ€
I, later at the age of 19, worked in a fast food restaurant and had a special order for a roast beef sandwich to which I replied loud enough for everyone standing in line to hearâ€¦â€¦
â€œOne Last Tango In Paris Coming Upâ€¦â€¦â€¦No Butter On The Buns!â€
Only a couple of people got it, you could tell by the looks on their faces and their laughter
The others were left standing without a clue!

I’ve placed a photo likely from Opening, in the photo gallery.

“The Graduate” opened here fifty years ago today. The film went on to play (day-and-date with Eric Wynnewod) for six months. And here’s a new retrospective article which includes some exhibition history (and other) details to commemorate the classic film’s golden anniversary.

Did this theater have the capability of showing scope and did it have proper masking?

The original two Rittenhouse Theaters were the oddest. Long boxes with a small screen. Yes, the screens were masked to produce smaller “wide screens”. Think today’s flat screen TVs – only further away from the viewer. I remember seeing The Graduate there. Saw same movie later at a neighborhood theater and the movie seemed more panoramic. I refused to see the re-release of West Side Story. After seeing it in Super Panavision and 6-track at the Midtown Theater, why pay the same price to see it in 3mm/mono on the Rittenhouse’s small screen? Yes, MONO sound only when I saw David Lean’s Passage to India there which was recorded in Dolby Stereo. Dolby Stereo was finally added to the three theaters when the middle theater was built.