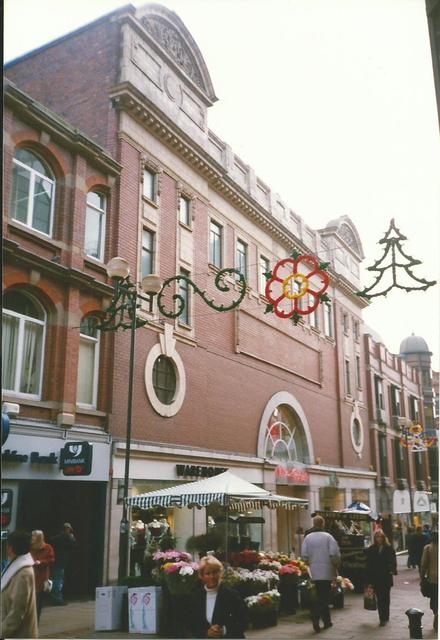 Located in Leeds city centre. The Scala Theatre was opened as a cinema on 24th June 1922 with "The Game of Life". It was built for and operated by Sol Levy, who already at that time had successfully opened other Scala Theatre’s in Liverpool and Birmingham, and other cinemas in London and Nuneaton, plus several more.

Designed in a lavish Beaux-Arts style, seating was provided in stalls and circle levels, with the circle extending along the side-walls. The cinema also contained a ballroom.

The Scala Theatre was taken over by the Denman/Gaumont Theatres chain in March 1928. In 1930, a Compton 2Manual/6Ranks organ was installed. It remained a popular cinema for many years. Eventually, Gaumont were taken over by the Rank Organisation, and they closed the Scala Cinema on 31st August 1957 with Rod Steiger in "Across the Bridge". The Compton organ had been removed in 1954.

The building was converted into a Waring & Gillow furniture store. It has remained in this use for many years, and was still a furniture store in 2005. By 2009, the foyer of the building was a Costa coffee house. The auditorium has sadly been gutted and today is in use as a Miss Selfridge womens clothing store.

A February 2007 photograph of the rear (former auditorium) of the Scala Cinema:
http://www.flickr.com/photos/stagedoor/400744797/

This website has two drawings of the Leeds Scala Theatre, one of its interior and one of its tea room (perhaps the ballroom mentioned above); click on them to enlarge them: View link

This site in 2015 suggests there are substantial remains:–

Hi, I’m currently doing this building up, if anyone is interested in seeing the original ballroom ceiling and stage let me know.