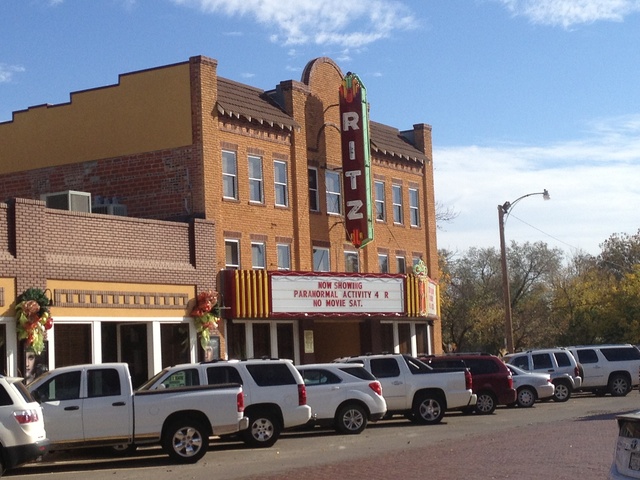 Since 1928 the Ritz Theatre was the entertainment mecca of Wellington, Texas, a small farming and ranching town in the Texas Panhandle. The theatre was very elaborate for such a small town, and was the first in the area to show talking pictures.

It has been nearly destroyed by the elements after being closed in 1981, but in 2003 a local preservation group started raising money to save it and convert it to a community arts center.

how is work coming along?

All contracts have been awarded and major reconstruction is now under way. A revised plan has taken in a neighboring building where a new concession area will be housed, along with an event space and dressing rooms. The balcony and stage have been rebuilt and a new floor has been poured. Work should be completed in the spring of 2007. Historic Wellington is seeking startup funding from outside grants, but most of the capital expense (at least $2.5 million) is coming from the Zephyr Foundation based in Wellington. Funds may be contributed to Historic Wellington, Inc., 1600 Haskell St., Wellington, TX 79095.

The Ritz opened its doors to the public Friday, Aug. 10 with a showing of “Rush Hour 3”. This is the first movie in the Ritz in more than 25 years. It’s been an amazing transformation from an almost forgotten ruin to just about everyone’s new favorite place to be.

My dad and his brother and sister used to go to The Ritz every Saturday back in the early 30’s when they lived in Wellington. The first time I saw it was in 1989 when I was back for a Groves family reunion. It was so sad to see the building that was in such disaray.
Im so glad that the theatre has re-opened and I cant wait to get a chance to go back there and see it again!!!!

The town has really gotten behind the theater. We all have enjoyed taking our kids to movies when we’re visiting for holidays, and the live shows have been well attended with many folks coming from other towns. The dressing rooms are second to none, and the auditorium itself is top notch. I hope you can see the interior – please ask Joe Ponder for a tour when you’re in town next time.

Thanks for linking to my photo. Yes, this was taken about the time I began working with the hometown folks to do something about the theater. There is a sad beauty in an image like that. With the restoration, we lost some of the grit that makes these places so interesting, but I figure there are plenty more ruins to look at in small towns across the country.

A photo tour of the Ritz in Wellington from 2009, Enter Here.

From 2010 an image of the Wellington Ritz Sign and neon along with a view of the ticket booth and entrance.

Just saw Jimmy Vaughn there last night and what a fabulous job Wellington has done on “The Ritz”.
Its just as nice on the inside as out.

Looking for a photo of the Bronco Drive-Inn Theatre that was in the same town as the Ritz Theatre, It was in Wellington,Texas also.