The Neon At Night Is Big And Bright… 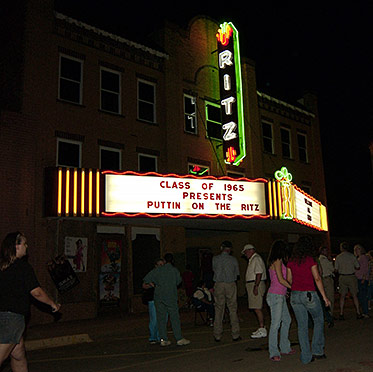 On Aug. 5, Historic Wellington, Inc. in the Panhandle town of Wellington, Texas had residents dancing in the streets under the neon glow of the newly restored facade of the Ritz Theatre.

Restoration of the 1928 mission-style theater began in 2003 with the removal of tons of debris from the ruined interior and the reconstruction of a new roof.

Local preservationists couldn’t wait until the project was finished before seeing the neon lights glow again. In 2004, Historic Wellington hired Wellborn Sign Co. of Amarillo, Texas to restore the blade sign and marquee. The sign was relit that same year, but it wasn’t until Aug. 5 of this year that the marquee and sign were lit together for the first time at an annual street dance in front of the theater.

Historic Wellington now has funding to complete the entire building restoration, thanks to support from a local family foundation, and final plans are being drawn now. The group credits the Southwest Office of the National Trust for Historic Preservation for jumpstarting the project with an intervention grant in 2002.

When the reconstruction is complete, Historic Wellington hopes to offer live performances as well as classic and first-run films at the Ritz.

BD Canada:
Congratulations to the resto team, and the many supporters on what appears to be a job well done!
Your work is inspiration for the nations!