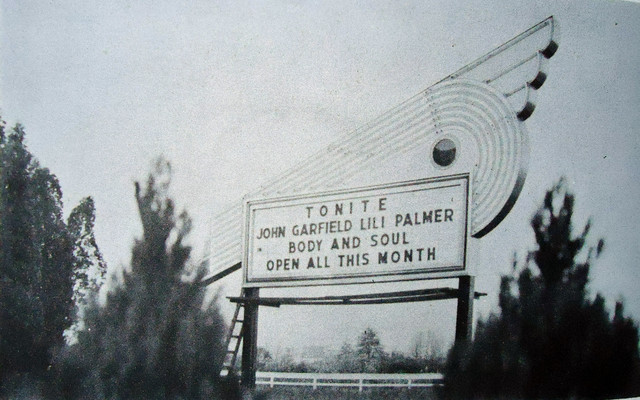 Located on N. DuPont Highway (Highway 13) in the New Castle district of Wilmington. The Brandywine Drive-In opened on July 15, 1949 with Errol Flynn in “The Adventures of Robin Hood”. It had a capacity for 550 cars. There was a childrens playground beneath the screen tower.

In the 1954 photo, what is next door? It looks like a race track of some kind. Thanks.

Ellis did not close in 1965. Not sure when exactly however I was still going there in 1967 while on boot camp leave. The item in the rear of pic is indeed a race track. Wilm Motor Speedway. Stock cars and other events (went to a rodeo there in 1950s) Next to Ellis was an amusement park called Kiddie Town. It closed in late 50s or very early 60s. Buck a car night, and towards the end all night shows were big deal. Sound system (pole speakers) were worst in Delaware but “privacy” factor over rode the need for clear sound.:–)

Approx. address for this drive-in was 4015 North Dupont Highway. the entrance itself was SOUTH of Hessler when the drive-in was open. Hessler was reconfigured to its present location. The drive-in was NW of present intersection.

Originally called Brandywine Drive-In. Opened 1949. The Ellis DI was the first to be opened in the Wilmington DE area. It was originally called the Brandywine Drive-In, and it was located a mile south of the city on the Du Pont Highway (Rt. 13). Opening day was July 13, 1949, with “The Adventures of Robin Hood” as the opening attraction. Projection and sound were RCA Motiograph, and the lot could hold 1,100 cars, plus seating for 250 people on foot. The marquee was 68-foot-tall, one of the largest in the state. It had a burgundy-and-white background in neon with the word “Brandywine” in magenta script, and “Drive-In” in white Egyptian block letters. In February 1955, the theater was sold to the Ellis Theater Company of Philadelphia for $85,000. Ellis proceeded to change more than the theater’s name. The screen was enlarged for Cinemascope (100 feet by 40 feet), the lot was nearly doubled in size, and in-car heaters were installed at this time.

This opened on July 15th, 1949. Its grand opening ad can be found in the photo section.

Rave323, next door to the Brandywine/Ellis drive-in was the Wilmington Speedway, a raceway for (I think) quarter midget cars; whatever, the coupes of the late 1940’s, etc.

I’ve done some research on the closing of the Ellis theater, and by newspaper ads, the last ad for the theater, in the Wilmington Morning News newspaper, was on Sat., Oct. 29, 1977. The films shown that night were Orca and King Kong, which were supposed to be shown through Sunday, the 30st. But there was no ad in Sunday’s paper, the 30st. On Tues., Nov. 1st, there was an ad that the theater was closed for the winter, and would open in Spring, 1978. They didn’t have any ads in the Spring of 1978, so I assume that the theater closed for good on Oct. 29, 1977, after the last show that day. I’ve added these two ads to the photo section on this theater.

The July 23, 1955 Billboard magazine wrote “Ellis Drive-In, near Wilmington, Del., reopened with accomodations for more than 1000 automobiles, twice its former size. Formerly the Brandywine, it is under direction of A. M. Ellis Theaters Company, Philadelphia. The spot is under the supervision of Larry Ruch, district manager. Don Warner, manager of the Chester Pike Drive-In, Chester, Pa., as also manager of Ellis Drive-In. … Box office has been relocated, new roads have been built, and a fence put around the property.”