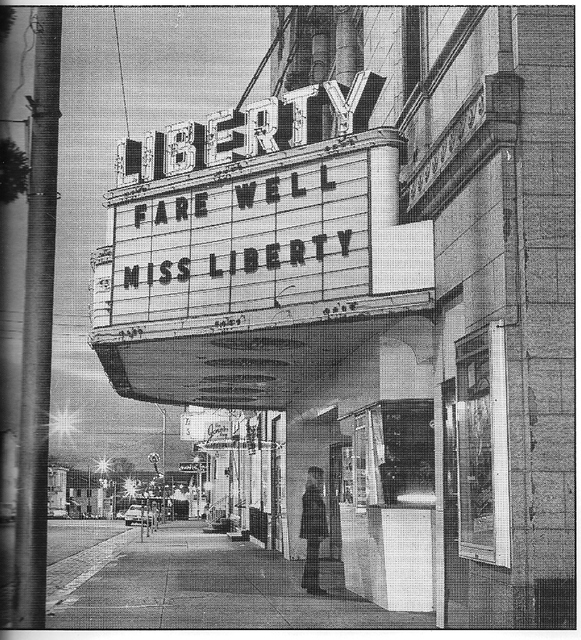 Surprisingly, I cannot find much information on this ornate theatre. It was the second theatre named Liberty in Zanesville. This one was across from the Cinema 1. I would guess it seated around 1,500. It was opened on October 13 1927 with Norma Shearer in “After Midnight” plus a stage show. It was equipped with a Robert Morton organ. It was closed November 23, 1974 and razed soon after when purchased by a bank for parking. It had a fairly large balcony, which was open when they were really busy.

I saw many movies their as a child, and thought it was quite spooky. A local theatre group used it for plays. My parents took me to one around 1969. Much to my surprise, a pipe organ rose from the orchestra pit. I enjoyed that more than the play. I have heard the organ was purchased by a local man prior to the demolition. In addition the three beautiful chandeliers in the auditorium survive as part of the house lighting system in nearby McConnelsville in The Twin City Opera House.

The name New Liberty Theatre begins appearing in Zanesville newspapers in September, 1927. If, as Walter Kussmaul says in the description (and I have no reason to doubt his memory) the Liberty was across the street from the Cinema 1 (which was at 30 S. Fifth), then it had a two-digit, odd-number address on South Fifth Street.

An outfit called the Ohio Finance Company had multiple ads in Zanesville papers during the late 1920s, and gave its address as “10 South Fifth Street Opp. New Liberty Theatre.”

The first Liberty had been on North Fifth Street, but had an even number. It must have been the theater mentioned in Bob Jensen’s comment above that had the organ installed in 1920. That house operated under other names for many years after the new Liberty opened.

The book Zanesville has a photo of the Liberty Theatre, and the caption gives the address as 13-15 S. Fifth Street, and the opening date as October 13, 1927.

The Liberty was a very handsome building, with a facade that featured ornate detailing in what must have been terra cotta (the style is not Art Deco, by the way, but more an eclectic Renaissance Revival with strong elements of the Rococo.) It’s possible that the terra cotta was actually made in Zanesville, as fired clay was for many years the city’s leading industry.

The Liberty was not as wide as the Quimby Theatre across the street, but probably had a frontage of at least 60 feet, and it was tall, with the cornice at least 40 feet above the street. It was an imposing structure. If the interior was anywhere near as good as the facade, it must have been splendid.

The Liberty closed on 11/27/1974. This is from “A Pictorial History of Muskingum County,” published by the Zanesville Times Recorder in 1994. Three exterior photos are on pages 72 and 73. One has “Fairwell Miss Liberty” on the marquee.

The address of the Liberty Theatre still needs to be updated to 13-15 S. Fifth Street. Google Street View now also needs to be reset to look in the correct direction, south from Main Street.

it was South 5th street not north 5th street. I went there many times growing up and went to all the good movies first with my mother (Sheila) and my grandfather (Albert). When I went in the marines in 1973 my Grandmother (Florence)) mailed me the newspaper article when they tore it down back in late 74. It broke my heart it was a beautiful place to go for many years and could have been renovated. Zanesville needs a few more classy places to go to downtown to bring it back to life again. The Balcony was great and as a kid we use to sneak up the steps to the box seats off to the side and watch the movies..it was great…until you were caught…lol

Tinseltoes: The Casino was at 624 Main Street and was opened before 1912 (in 1907, according to one source) and was operated by Walter C. Quimby. In 1912 it was renamed the Grand Theatre, which it remained until closing in 1950. During its last ten years it was operated by the Shea circuit. The Grand was dismantled in 1952, but I’m not sure what became of the building. It is not yet listed at Cinema Treasures.

Final film was “Taking of Pelham 1 2 3.” They had ‘Goodbye Miss Liberty’ on the marquee when that film was showing. 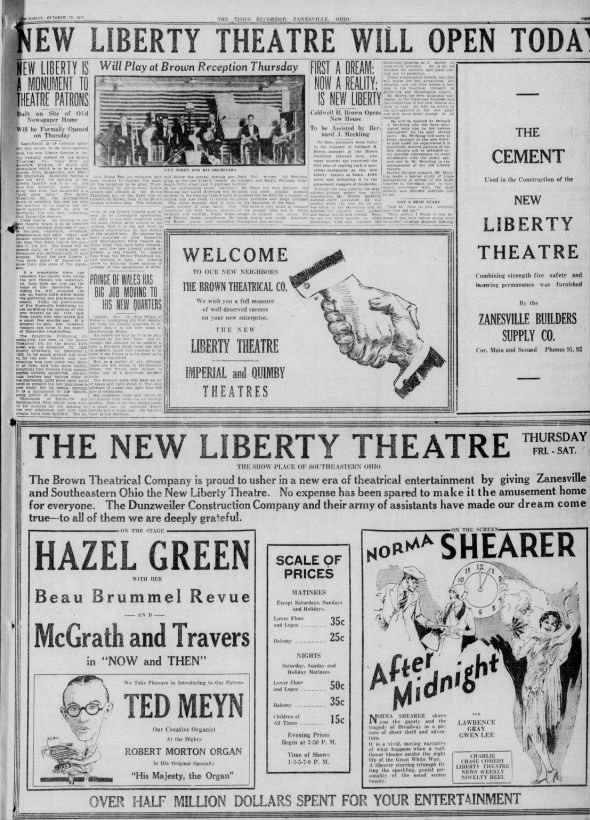