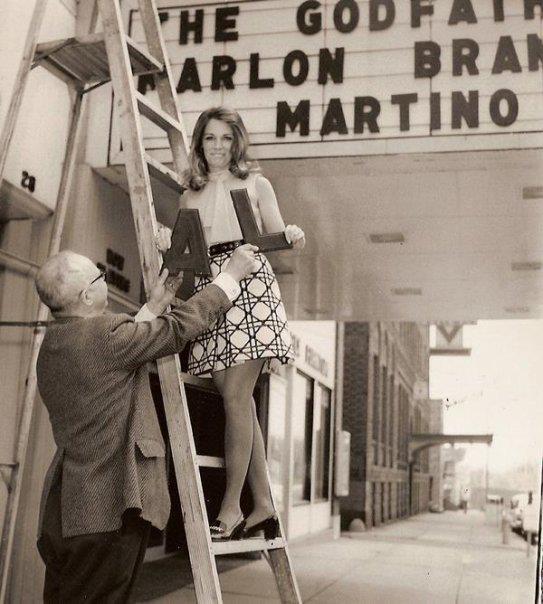 Here is part of a November 1952 article in the Zanesville Signal:

The State theater opened yesterday in the renovated Quimby. In the shuffle Zanesville lost an old theatrical name and two theaters. The 39-year old Quimby sign came down and wreckers started to work on the old Schultz and the Grand. This train of events was started by the announcement in September that the old Schultz Opera block on North Fifth street had been sold to Hyman Cohn of Chicago. The reason for this sale became known on Oct. 25 when the J.C. Penny company leased the property and announced that it would be torn down to make room for a modern store building.

The Variety theater, as the former Schultz opera house was known, closed its doors on October 2. Closing of the Variety gave an opportunity to the Shea theater people to turn on the lights in the old Quimby. At the same time they decided to remove the equipment from the old Grand. That leaves Zanesville with three year-round theaters instead of five. The shift can probably be attributed drive-in theaters and television.

It seems that Walter C. Quimby managed both of the theaters whose signs are to go down. In the Zanesville city directory for 1912, Quimby was listed as a resident of 702 Main street. His wife was Lottie A. Quimby. His occupation was manager of the Casino Theater at 624 Main street, the second door above Cypress alley on the south side of Main street between Sixth and Seventh. That is the location of the current Grand.

Neal Watkins of 1021 Greenwood avenue worked for Quimby at his South Fifth street theater. He recalls that Quimby had been a bicycle racer before he came to Zanesville from Steubenville. He sold his racing medals and rented chairs from undertakers to open a small nickelodeon in the present Zulandt grocery store location on South Seventh street.

After getting a start there, Quimby opened the Casino on Main street in the room later known as the Grand. At the same time he operated the Airdrome on the site of the old Palace Garden on South Sixth street. Later other proprietors built a roof over the Airdrome and converted it into a roller skating rink.

Soon after Quimby opened the theater that bore his name on South Fifth street, he disposed of the Grand. In the Zanesville Signal for the early months of 1913, we find advertisements for both the Grand and the Quimby theaters. Those ads prove two things: Quimby’s theater was built in 1912 and the name of the old Casino was changed to the Grand in the same year.

The Shea Theater Corporation took over Zanesville Theaters, Inc. in 1940. By that transaction the Shea organization secured the management of the Imperial, Quimby and Grand theaters. The Weller had been controlled by the Shea interests before that date. The Grand was closed in 1950 because of lack of patronage. The Shea officials are now dismantling the equipment in that theater. The building is owned by Tom and Paul Joseph. Owners of the former Quimby building on South Fifth street are Dr. Lester Lind and Mrs. Herbert Lind.

By 1919 Walter Quimby had moved to Indiana, and the theater that bore his name was managed by the Imperial Theater company. In the neighboring state Quimby expanded his activities and became head of a chain of theaters. After Quimby’s death about a dozen years ago, his widow and her brother sold several of their theaters to Paramount.

That MIGHTY STEVENS THEATER PIPE ORGAN installed in the theater in 1913 was a 2 Manual (Keyboards) made by the George Stevens & Co. of Old Bennington VT.

The address currently given for this theater is not that of the former Quimby/State Theatre. The newspaper article ken mc quoted in his comment of Sept. 19, 2009, says that the Quimby/State was on South Fifth Street. The Arcadia Publishing Company’s book “Zanesville” has photos of the theater as the Quimby and as the State, and gives the address as 30 S. Fifth.

The address Chuck found for the Cinema 1 at 17 or 19 N. Fifth must have been another theater of the same name, operating at a different time. The 1973 article ken mc quoted on July 8, 2009, says that the former State was by then called the Cinema 1.

The Cinema 1, aka State, Quimby Theater closed in 1978. This is from “A Pictorial History of Muskingum County page 74, published by the Zanesville Times Recorder, 1994.

The trade journal The Moving Picture World published the following item about the Quimby Theatre in its issue of April 5, 1913:[quote]“QUIMBY’S $60,000 EXCLUSIVE PICTURE HOUSE.

“The following excerpt is from a letter of W. C. Quimby: ‘If any dubious person should doubt that money invested in a comfortable, sanitary and fireproof moving picture theater for the exclusive presentation of photoplays is not a good investment, he ought to visit Zanesville, Ohio, and look over my new $60,000 moving picture theater.’ Judging from the number of beautiful photographs illustrative of interior and exterior views which Mr. Quimby has sent us, it looks as though Mr. Quimby had spent over twice the amount that he says he has, and they further point out the fact that Mr. Quimby’s faith in the stability of the picture business is any-
thing but weak.

“The plot of ground upon which the structure stands has a frontage of 70 feet and a depth of 132 feet. It is modern in every respect and is built of fireproof material throughout. Nothing has been left undone for the benefit of patrons in the way of convenience. Mr. Quimby opened his new house around the first of June, 1912, and has been playing to crowded houses ever since. He has turned crowds away in the summer and is doing it yet. People from neighboring towns come to his house in automobiles. It has a seating capacity of 750 persons.

“The lobby is beautifully lighted and standing in conspicuous places are neatly framed posters of the pictures constituting the day’s programme. There are check rooms for women’s and men’s garments, wraps, etc. The checking system of the house is so perfect that a man may have his cigar checked and get it back in good condition when the entertainment is over. The ushers and attendants are examples of refined etiquette and neatness of appearance. As
one sits in the luxurious leather opera chairs watching the pictures, he breaths nothing but the purest of air, for the ventilating apparatus of the theater is perfect. It is cool in
the summer and the right temperature of warmth permeates the place in the winter.

“In justice to Mr. Quimby’s excellent management, a word ought to be said of the music which he gives to his patrons. When the theater was built he installed a $4,500 Wurlitzer Unit orchestra. After using this instrument for about six months, Mr. Quimby was so well pleased with it that as a Christmas present to his patrons he bought and installed a $3,500 pipe organ. These instruments are played by a competent musician, and the audiences express great satisfaction over the music. Mr. Quimby has recently installed his own electric light plant, which is saving him about $150 a month. He was compelled to do this on account of the exorbitant rates charged by local lighting companies. Mr. Quimby is also the owner of other large houses playing to vaudeville and moving pictures. The admission prices to the new house are five and ten cents.”[/quote]

Thanks Joe great History,Opened his owned power plant,that has got to be a first.

The article I quoted in my previous comment was accompanied by a photo of the entrance to Quimby’s theater (in the left column— click on the + sign in the toolbar at lower right to enlarge.) The entrance was later altered, as depicted in the photo linked by Chuck on April 27, 2009, but some of the original detail can still be seen above the marquee in the modern photo.

Photos of marque as Quimby and State added.

I believe I have some of the old theatre seats from this cinema before it was torn down. My grandfather purchased several dozen rows of seats from either this cinema or liberty theatre.