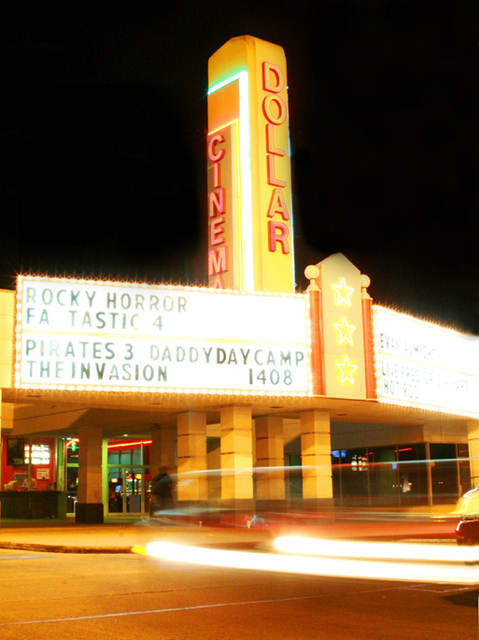 Clicking on the Pictures tab on this page from the Premiere Cinemas' website will bring up six thumbnail pictures of the theater which can be expanded for better viewing: http://www.pccmovies.com/theater.php?rtsID=96#

Am I safe to assume this was a Cinemark at one time with the black an white checkered Tiles and Orange and Green wall papers, and their typical concession sign?

I thought the same thing, but I don’t think that it was. I want to say that we did newspaper research for the Houston area and nowhere did it come up that Cinemark operated it. My only guess as to why it looks so Cinemark-ish is that it was pieced together using equipment and furnishings from a nearby closed Cinemark.

Believe it or not, nope, was never a Cinemark. Back in the 1980s and early 90s, Houston had a company called “Dollar Cinema, Inc” (see their defunct Manta page at http://www.manta.com/c/mml6xs9/dollar-cinema-inc and an old Corporation Wiki at http://www.corporationwiki.com/Texas/Webster/sandra-l-boovy/32132934.aspx) that would buy up and operate older theatres (such as the Briargrove 3, Westminster 8, Parkview Twin, among a few others). They eventually decided they wanted to build their own theatre from the ground up in the fast developing Clear Lake area, and contracted with Cinemark and their developers to build them a theatre. While it looks exactly like a Cinemark from the late 80s (the theatre opened in 1988 — I want to say either November or December) it was owned and operated by Dollar Cinema, Inc, and operated as a sub-run venue from the very first day it opened.

This venue became Dollar Cinema, Inc’s “flagship” theatre, and their company headquarters, and all operations for the company were ran from this theatre.

Even the booth package is Cinemark-y of the time period — CFS lamphouses, Ultra Stereo processors, Peavy Amps, Speco and ORC Super platters (although the MUT for the Super Platter has a factory sticker that clearly says “plater” on it), with Simplex PR1014 projectors. The two large houses had the Super platters which were junked and replaced with matching Speco platters not long after PCC took over operations.

Sadly, it’s rumored that Dollar Cinema, Inc had so many people stealing from the company (and I’m talking at the management level) was the reason the company was put up for sale. Premiere Cinema came in and took over operations of a few of the theatres but ultimately NASA was the only one deemed profitable, and the other locations were closed.

They did some REALLY cheap things here, too. My favorite example is the exhaust for the projectors. Instead of an exhaust fan for each projector, there is one long piece of ductwork running the length of the booth. Each projector connects to this ductwork, and there is one rooftop fan exhausting to the outside right in the middle. And don’t even get me started about those garbage seats we had to replace back in 2004. But then they did some really expensive things, too. Like the sound systems for our two largest houses just seem over-the-top compared to the rest of the theatre. The two big houses were Dolby CP55s (eventually updated with DTS), JBL speakers, and QSC amps, while the smaller houses were analog-only with USL 105/195s and a Peavy package. The CP55’s finally gave up the ghost a few years back and were replaced with JS200s, but those darn USL 105/195s are still operating.. for a few more days, anyway.

There is going to be some remodeling here soon (very soon). So there is hopes it will be a little less 1980s Cinemark-y after they get done.

My favorite Dollar Cinema, Inc moment? In 1994, they were showing The Naked Gun 33 1/3, right about the time OJ Simpson was arrested. The result? The movie hotline announced “The Naked Gun 33 1/3, starring the killer OJ Simpson!”. True story. This incident is so famous, its even cataloged in the book “Cinema Houston” (http://www.cinemahouston.info/) by David Welling.

Thanks for the info on that. Explains a great number of things.