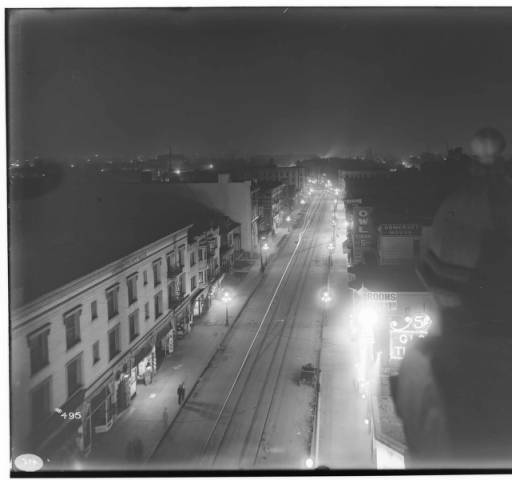 The Globe Theatre, located at the corner of East 5th Street and Los Angeles Street, on what was soon to become the city’s skid row, opened on September 19, 1908. The advertisements promoting it in the Los Angeles Herald proclaimed it to be the "…most beautiful motion picture theater in the state…."

The building was designed by father and son architects Theodore Augustus Eisen and Percy Augustus Eisen, whose partnership had been formed in 1906.

The Globe Theatre was listed in city directories as late as 1914. It might have operated later than that, as the address was listed in the category Motion Picture Theatres in the 1915 directory, but under the name S.W. McCormick, possibly the operator. No theater was listed for this address in directories for 1923 or later, so it was gone by then.

The building survived at least into the 1980’s, but has subsequently been demolished.

When I began exploring downtown Los Angeles in the early 1960s, the bus I took to the depot at 6th and Main ran along Los Angeles Street, and I must have passed by the Globe’s building, at the southeast corner of 5th, more than a hundred times. I probably walked through this intersection fewer than a dozen times, though, as it was the heart of skid row.

I have only a vague memory of the building, which seemed a typical business block of the late 19th-early 20th century. It gave no clue to its former life as a movie theater. But I do remember the business in the corner shop, at 200 E. 5th. It was the Victory Liquor Store, and in those days underage would-be drinkers would go the east 5th Street and pay one of its denizens to buy them a bottle. The Victory was the place the purchases were most often made. That accounts for the majority of my pedestrian visits to the area.

Some daring souls made solo booze runs to the neighborhood, but I was not among them. I always went with friends. Waiting for whoever had spotted us as hooch hunters and offered to buy a bottle of Smirnoff or Ronrico for us, we would usually stroll along 5th Street, passing right by what had once been the entrance to the Globe, and none of us ever had a clue that it had ever existed. I suppose we were too busy keeping an eye out for the squad cars that came by far too frequently.

Once our skid row personal shopper had delivered our illicit bottle and collected his payment, we’d scram as fast as possible, unaware of the theatrical history to which we’d been so close: 1908’s most beautiful motion picture theater in the state!

I’ve checked the 1963 City Directory to see if a listing gave any indication about what might have occupied the theater’s space then. 202 E. 5th is listed as the Golden Gate Cafe. I don’t know if it occupied the theater’s auditorium or not. The frontage of the building had been converted to nondescript storefronts, and the next two addresses were probably also in the former theater’s building. 204 E. 5th was occupied by one H.H. Kemp, and 208 was listed as the Veterans Club. There was no listing for 206. I wonder if the Veterans Club could have occupied the Globe’s auditorium? Perhaps there are some veterans around who remember.

An item in the January 29, 1916, issue of The Music Trade Review says that the “Grove” Theatre (perhaps a typo for “Globe”) at 5th and Los Angeles Streets had been reopened by Silverman & Kramer as the Jewel Theatre. I don’t know how long the operation lasted. There are no Los Angeles city directories for the years 1916 through 1922 available online. The 1923 directory lists the Jewel Theatre on Whittier Boulevard in East Los Angeles, but no theater at 5th and Los Angeles Streets.

What became of the Globe Theatre building after it ceased to be a theater is revealed in these photographs showing the Union Stage (bus) Depot in 1932. The waiting room was probably the former auditorium.

By the time I first saw the building the auditorium space had been converted into a parking garage, and the bus depot’s corner entrance had been replaced by a liquor store.