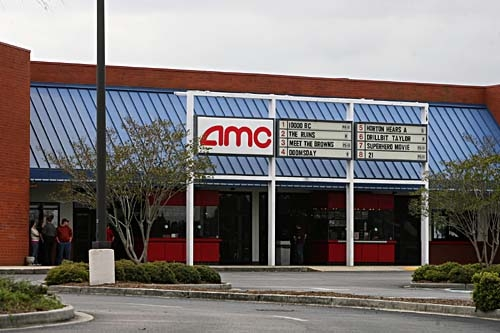 Not to be confused with an earlier Northwoods Cinema that was attached to the Northwoods Mall, this free-standing theater opened under the management of General Cinema in 1985, and later became an AMC operation. AMC closed it in 2008. It was then acquired by Southeast Cinema Entertainment which gave it a thorough renovation and reopened it in the fall of 2010.

Google earth’s historical images shows the lot is empty in 1989. Is Google wrong? From the shape of the theatre could it have been built closer to 1990?

I’m fairly certain that the cinema was constructed in 1985. This was when a major expansion took place at the mall and a new wing added that included a 4th anchor store, Thalhimers (now Dillard’s). The cinema building was added directly across from the Thalhimers building. If it didn’t open in 1985, it opened shortly thereafter and was definitely open prior to 1989.

An article about the reopening as the Northwoods Stadium Theaters; it includes two pictures which enlarge if clicked upon: View link

The Northwoods Stadium Cinemas has been operating with 13 screens for over a year now.

I was a manager with AMC between 2006 to 2007 at this very theatre. The theatre actually opened in 1990. Citadel in 1983. I also worked several manager shifts there and started in 2005 on floor staff.. Went to both theatres a lot as a child back in the General Cinema Days. I later from 2010 to 2011 was assistant manager at the Citadel Mall Stadium 16 with Imax, now southeast cinemas owned by the Smiths in Charlotte, NC. Great people. We even installed all the projectors, etc when Northwoods Stadium opened up in fall of 2010 under Southeast Cinemas. Paula Gadsden worked for GCC and AMC and Southeast when it first opened. She was there about 20 years I believe. Rick Turner was manager before her. Matt Paulk was GM of AMC Northwoods 8 from 2006 to 2008 and John Caffrey, just before him. For years, Mr Turner, was GM of both locations.