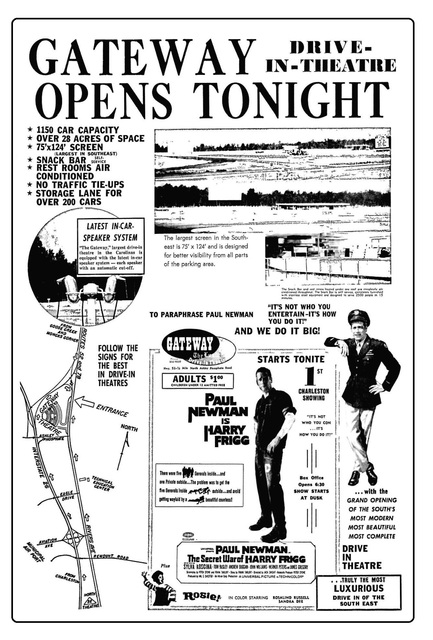 The Gateway Drive-In opened on June 5, 1968, featuring “The Secret World of Harry Frigg” with Paul Newman, Sylvia Koscina, Andrew Duggan and Tom Bossley. The second feature was “Rosie” with Rosalind Russell and Sandra Dee. It was the biggest drive-in built by Consolidated Theatres in Charleston and screened movies along with the North 52 Drive-In and the Magnolia Drive-In. It featured a 75 foot X 124 foot screen tower with a parking ramp that could accommodate 1,150 cars. The concession stand was designed to serve 2,500 people in a time frame of 15 minutes. An additional feature of the theater was a playground for the kids. The Gateway Drive-In was designed with the same modern features as the North 52 Drive-In that was rebuilt in 1962.

As with all the drive-in theatres in the Charleston area in the mid-1970’s, it started to show alot of “R” rated and adult movies. Competition was fierce in the area with seventeen indoor screens in Charleston and most getting first run features. This left the drive-ins like the Gateway with second run and adult movies. Times were changing in the drive-in theatre business and the property was becoming more valuable in the area. These two factors forced the theater to close in 1979. It was only 11 years old when it closed and it was the last new drive-in theatre built by Consolidated Theatres in the Charleston area. The Gateway Drive-In was later demolished and redeveloped for retail use.

The pictures on its gallery page at Drive-ins.com show aerial views of the site.

In doing my research I noticed that those drive-in aerial locations names and are wrong.