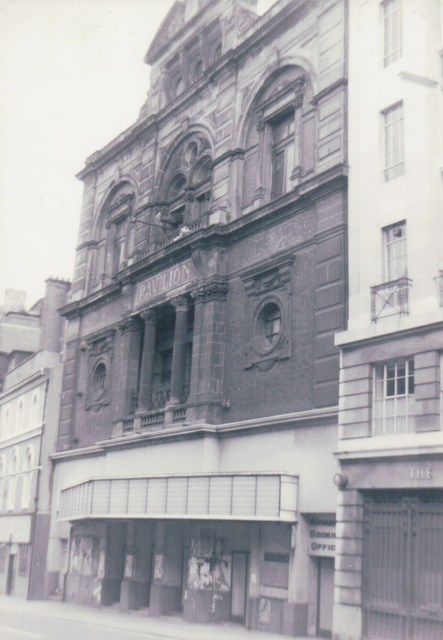 Located a few doors away from the Tyne Theatre. The Pavilion Theatre was opened on 23rd December 1903. Designed by the noted theatre architectural firm Wylson & Long, it had seating in orchestra, dress circle levels and a gallery which seated 600. The internal decorations were by Felix de Jong and included busts of naked ladies as part of the decoration.

It was equipped with a Bioscope projection box, and films were part of the variety programme from the early days. Between 1915 and 1917 it had dropped films and was staging variety and revues.

It re-opened under new management as the New Pavilion Theatre on 10th December 1917 with D.W. Griffith’s "Intolerance", and remained a cinema for the remainder of its life. A projection box had been built on the stage.

In 1919 a Nicholson & Lord (straight) organ was installed, which had 2Manuals and 15 speaking stops. In March 1928 the Pavilion Cinema was taken over by Denman/Gaumont British Theatres.

In late-1960, it was closed for extensive internal modernisation, which removed or covered over all traces of the original decorations. Re-opened on 31st January 1961 as a ‘Roadshow’ cinema, it was re-furbished again in March/April 1968. Closed by the Rank Organisation on 29th November 1975 with Robert Blake in Truman Capote’s "In Cold Blood", the building then stood empty and unused until 1990 when the auditorium was demolished for a planned proposal of flats to be built on the site, retaining the facade. Delays in building the flats resulted in the facade being demolished in May/June 1992, and a block of flats was built on the site.

In the 60s and 70s the Pavilion was equipped with 70mm Vic 10 projectors and stereo surround sound. The projection room was now at the back of the circle. In 1975 Not long before it closed the Pavilion had the uk premiere of the film “Slade in Flame” with the group Slade present at the premiere. I remember watching a few Bond films at the Pavilion when I was a child and queuing along Westgate Road to get in. I distinctly remember the orangey coloured seats.

The Pavilion was not a roadshow house following its early 1961 refurbishment (it was closed from January 8th until Monday January 30th when it reopened with a special evening show of The World of Suzie Wong, regular show began the next day). For the next two and a bit years the Pavilion was a weekly change house with an occasional longer run. An attempt at a roadshow presentation of Judgement at Nuremberg had to be aborted after two weeks in January 1962 due to poor business (it was replaced with a quickly cobbled together double bill of Pillow Talk and Doctor at Large). The Pavilion became a roadshow house when it took over Lawrence of Arabia from the Queens Hall on May 26th 1963, having been equipped for 70mm. Curiously the Queens carried on with three weeks of run of the mill 35mm films until closing for the Cinerama conversion.