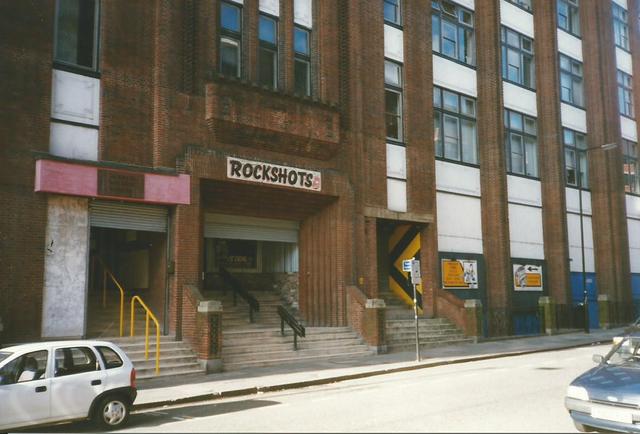 Located in a former Art Deco style Co-operative building dating from the late-1920’s, which was named Alfred Wilson House. The ground floor and basement levels were converted into The Newcastle Entertainment Centre, consisting of a 4-screen cinema, a Hofbrauhaus (German beer bar), and a gay discotheque named Scamps.

Studio 1-2-3-4 was opened on 13th December 1973 with Roger Moore in "Live and Let Die", Liza Minelli in "Cabaret", Paul Newman in "Butch Cassidy and the Sundance Kid" and "Sex is the Name of the Game". It was operated by the Leeds based Star Cinemas chain, and seating capacities in the auditoriums were 85, 112, 105 and 142.

Soon after opening, the programming changed to a mix of sex and horror films. On 30th March 1980, the smallest screen, the 85-seat screen 1, was opened as the Penthouse Cine Club, screening uncensored sex films. The Studio 1-2-3-4 closed on 26th March 1983 with "Pick-Up Girls", "Incubus", "Werewolf Woman" and "Dead Men Don’t Wear Plaid".

The former cinemas were used for a while as a Laser Quest ‘shoot 'em up’ venue. Scamps disco was later re-named Rockshots, and until 2008 operated as a popular gay nightclub known as The Powerhouse until it re-located. The Hofbrauhaus later operated as a bar named Village. There are plans to convert the now empty building into a hotel and leisure complex. It was converted into apartments.

As great as “BUTCH CASSIDY and THE SUNDANCE KID” was strange they played a second run movie on Grand opening night.thanks KenRoe.

The cinema played second run films almost exclusively, although, oddly my recollection is that they charged higher prices than the ABC and Odeon. One film that did play here first run was the John Carpenter film “Dark Star” which gave me the unique experience of being the sole member of the audience to see it.