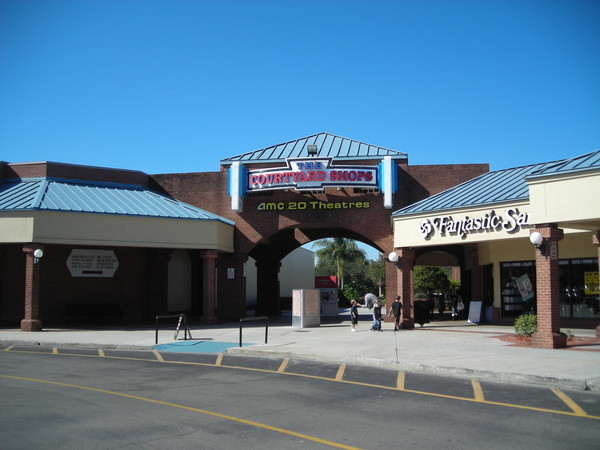 There are six pictures of the theater on its CinemaTour page: http://www.cinematour.com/tour/us/6497.html

An article about the installation of the digital IMAX screen: View link

I uploaded the grand opening ad in this theatre’s photo section.

If you could find the ORIGINAL grand opening ad, that would be nice. This theatre did not open as a 20-plex in 1986.

I assume that it opened as an 8 plex similar to the Seminole, Tri-City and other AMC 8’s in the surrounding area.

If you look at the second picture in the Cinematour link, the “Guest Services” window is the original box office and entrance, complete with the AMC door panels.

Yes, this theater opened as an 8-plex in 1986. as part of the then new Regency Mall. At the time of its opening, it was actually the third cinema to open in the Brandon area (Cineplex Odeon owned a 4-plex, The Plitt, not even a mile East of Regency and there was the Brandon Twin Theater, which both later became discount second run cinemas) The original eight cinemas are now cinemas 1,2,15-20. And yes, the current Guest Services was the former Box Office. If memory serves me correct, AMC added 12 screens not very long after the Brandon Town Center was built on the south side of State Road 60 to squash rumors of AMC moving across the street to the mall as well as preventing a competing chain from entering the market. During this time period, AMC also built another megaplex across the city (Veterans Expressway 24) to keep up with Regal(Lutz, New Port Richey, and Sarasota Hollywood megaplexes) and Muvico’s(Centro Ybor 20, Starlight 20, Baywalk 20) invasion of the area. I remember seeing all of the blockbuster releases there growing up in Brandon. The closest cinemas to AMC within 30 miles are the Channelside 10, Centro Ybor 20, Starlight 20, Lakeside Village 18(if memory serves me correct), and the University Mall Cinemas.

and the newer AMC Westshore 14..well, they added a second floor expansion in recent times to Westshore Plaza

Just saw a movie here last week and I was IMPRESSED!! AMC spent some money and retro-fitted the original 8 houses to a stadium tiered seating. They also remodeled the restrooms, concession stands and other deficiencies they have been running for the last 10 yrs at full price.

Carlton_Banks is correct: If memory serves me correctly, it was Cobb Theatres that threatened to build a new megaplex at the then new Brandon Town Center (now known as Westfield Brandon) back in 1995. At the time of the Regency’s expansion, there were a few obscure locations in the 30-mile range Carlton_Banks mentioned. I believe AMC had a 4-screen location off of Dale Mabry that shortly before its closure, played second-run movies (the Twin Bays 4 I believe it was called?); AMC also had a 6-screen location in Hyde Park (called the Hyde Park 6…AMC is not known for their creativity); There was also the Hillsboro 8 (owned by Cineplex Odeon), the University Collection Cinemas (which I believe was Cineplex/Carmike), the Britton 8 (which I believe was a Muvico location), and local operators, at the time, in Plant City and Zephyrhills. Regal, Cobb, and Muvico attempted to play catch-up in the mid-late 90s with massive expansion throughout the Tampa Bay Area, which hurt them in the end.

The first 8 screens opened on March 28th, 1986. Grand opening ad in photo section and below.